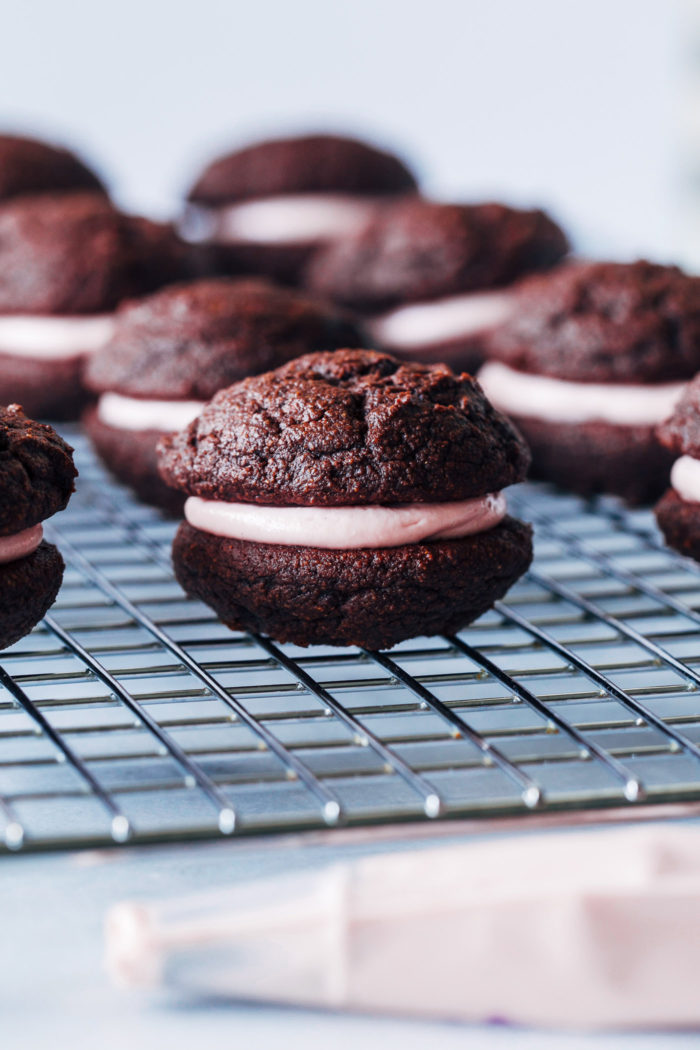 Love is in the air. Can you feel it?

If not, you will after you take a bite of one of these Vegan Chocolate Whoopie Pies. The rich chocolate flavor and soft cake-like texture paired with the smooth vanilla cashew cream is sure to bring out some of those feel-good endorphins. 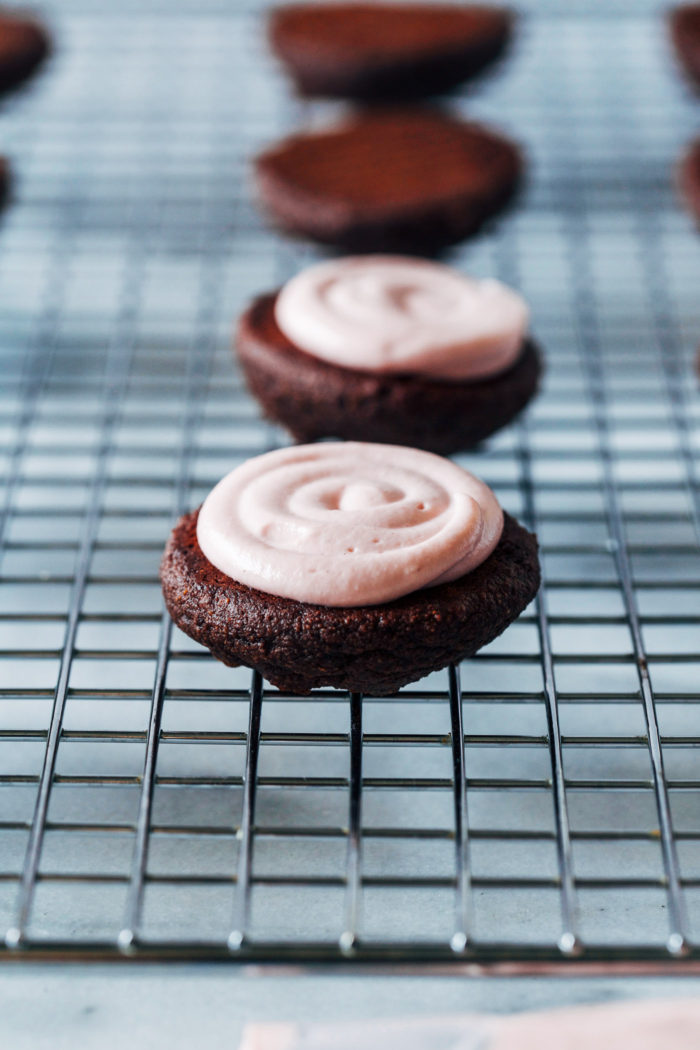 In full disclosure, I have not been feeling the love for these whoopie pies. After making them about ten times over the past month, I’m not sure I can eat another whoopie pie ever again.

We both know that’s a big fat lie.

Vegan and gluten-free baking (that’s also starch-free and gum-free) remains to be the biggest challenge for me with this blog. I feel like I’ve mastered a few cookie recipes, but cakes and muffins are another ballgame.

Even though I feel like I climbed a mountain of a million little chocolatey cakes for this recipe, the end result was worth it. In honor of the upcoming Valentine’s Day, they’re filled with a silky cashew cream that’s dyed pink with just a touch of shredded beet. Cause you know I like to keep things natural. 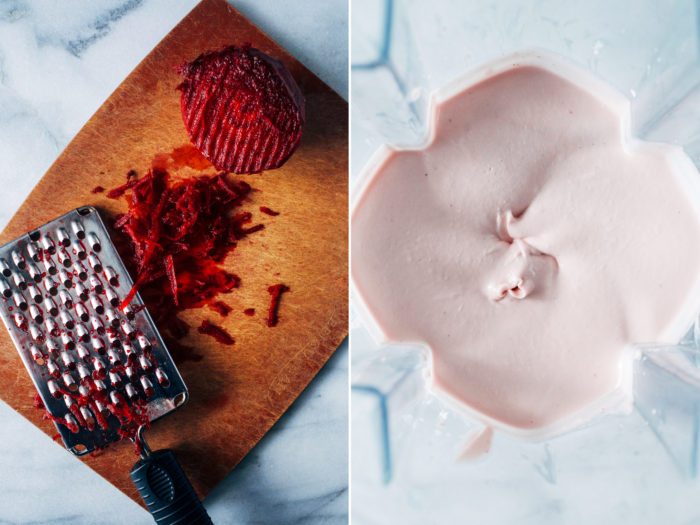 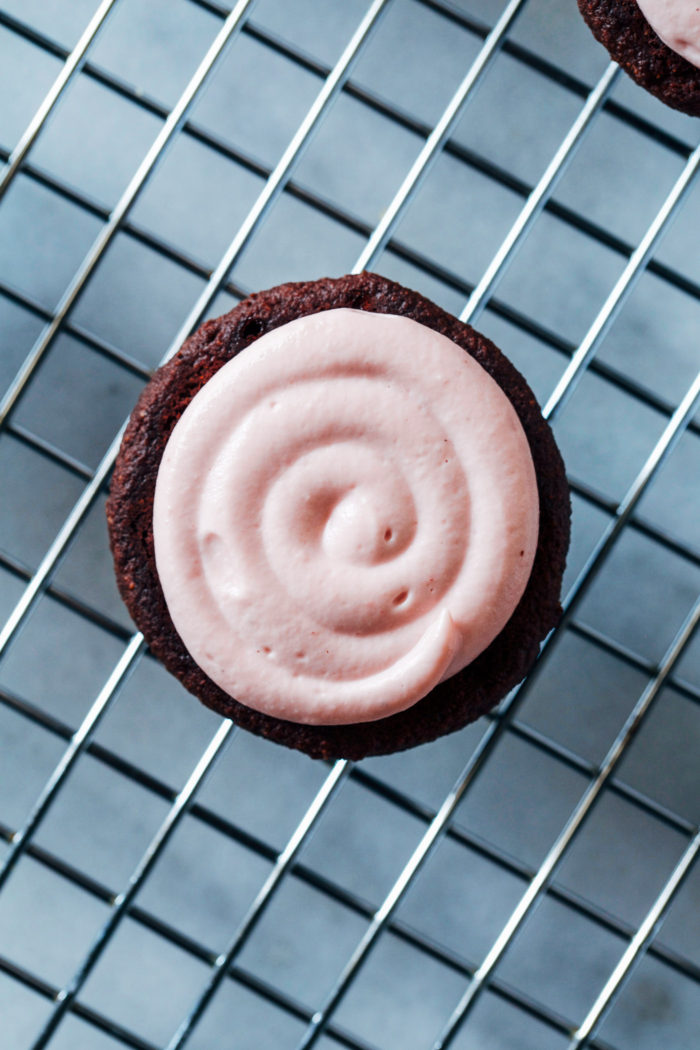 In order to get a silky texture, the cashew cream does require a high speed blender but if you don’t have one you can make a vegan buttercream frosting (with a few teaspoons of beet juice for coloring) instead.

I went the cashew route for a healthier option but I mean, it’s dessert. As long as you don’t eat them every day then, what the hell, why not? ;) 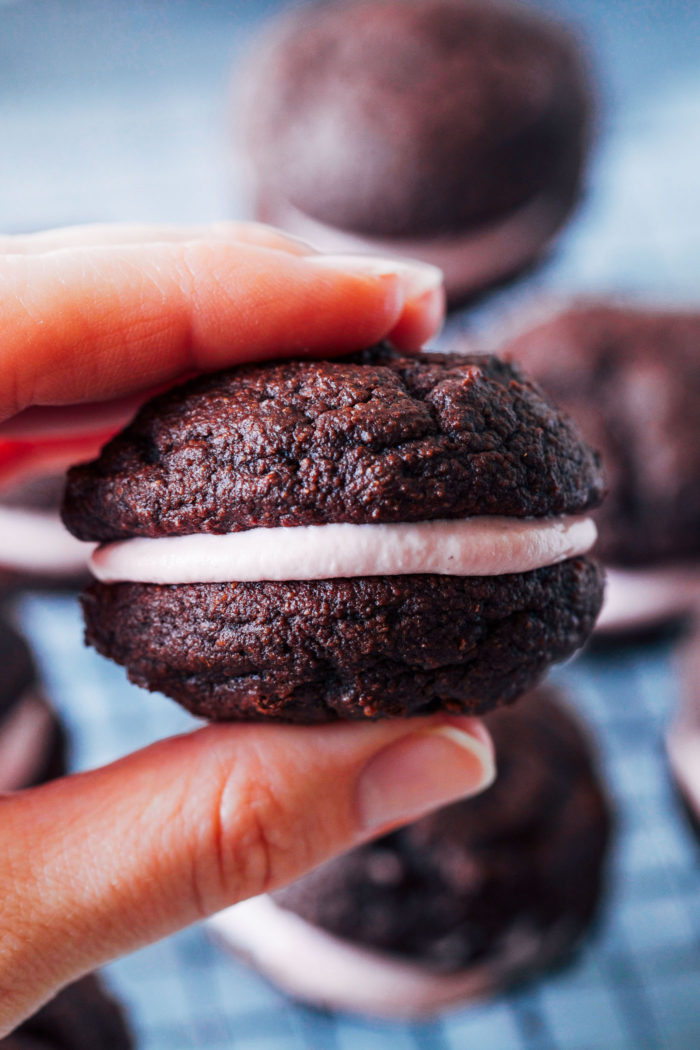 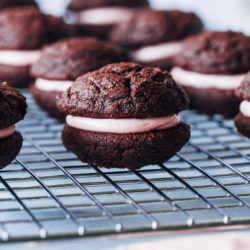 For the Whoopie Pies

Preheat the oven to 350°F then line two baking sheets with parchment paper.

In a small bowl, combine ground flax with water. Whisk until smooth then set aside to thicken.

Using a fine mesh sieve, sift together the oat flour, baking powder, salt and cocoa powder into a large bowl. Sift the almond flour last, discarding of any large lumps that remain in the sieve. You should have about 2 tablespoons left over. This process helps give the whoopie pies a smoother texture.

To the bowl of a stand mixer with the mixing attachment (or a bowl using a hand mixer), combine almond milk mixture, flax mixture, pure maple syrup, apple sauce, vanilla extract and coconut sugar. Mix on high for 10 seconds, until smooth.

With the mixer running, incorporate the dry ingredients a little at at time. Add the melted coconut oil last then allow to mix for about 15-20 seconds, until no large lumps remain. Use a spatula to scrape the sides and bottom of the bowl, making sure all of the ingredients have been incorporated.

Using a scooper, scoop out 1.5 tablespoons of the batter at a time and place on the lined baking sheet about 2-inches apart. Bake in the oven for 10-12 minutes. Set aside to cool for at least an hour before icing. They will firm up as they cool.

Meanwhile make the cashew cream by combining the soaked and drained cashews with the remaining ingredients in a high speed blender. Blend until smooth, adding more maple syrup to sweeten, as needed.

Transfer the cream into a pastry bag or a plastic bag with one end cut off. Carefully pipe the cream into the center of half of the cookies then top with the other half. Serve and enjoy!

*Be sure to use certified gluten-free oat flour for allergies

**Wash and peel 1 small beet for shredding. I like to use the leftovers for smoothies! 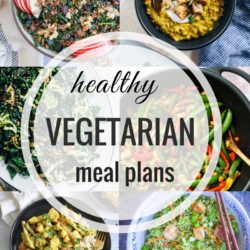 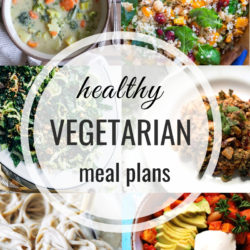 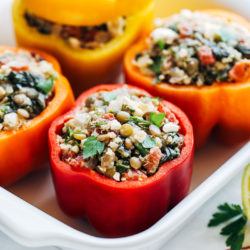