Dreamy Vegan Snickerdoodles- cinnamon sugar cookies with perfectly chewy edges and a pillowy soft center. So good that you would never guess that they’re gluten-free and dairy-free! 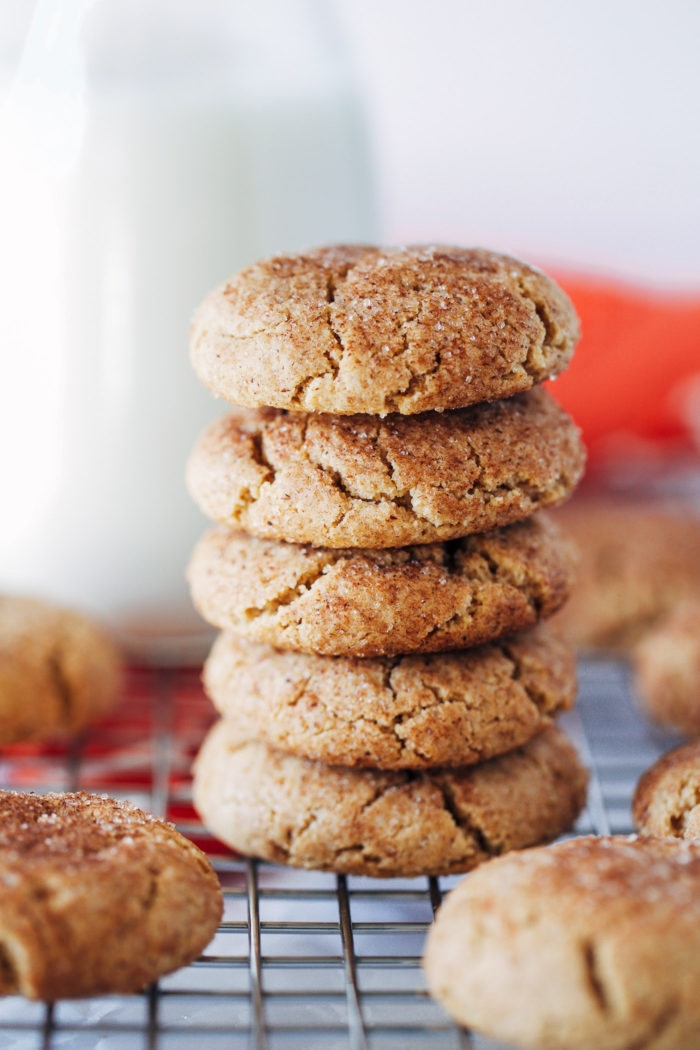 I feel kind of silly calling a cookie dreamy but that’s the best word I can think of to describe these snickerdoodles. They’re like the Ryan Gosling of cookies.

They look mostly innocent yet still give off that bad boy exterior that makes you reallllly want to take a bite. But what you didn’t realize is that what’s inside is actually good for you and you don’t feel so bad afterwards. Instead you’re left with pure and total bliss. 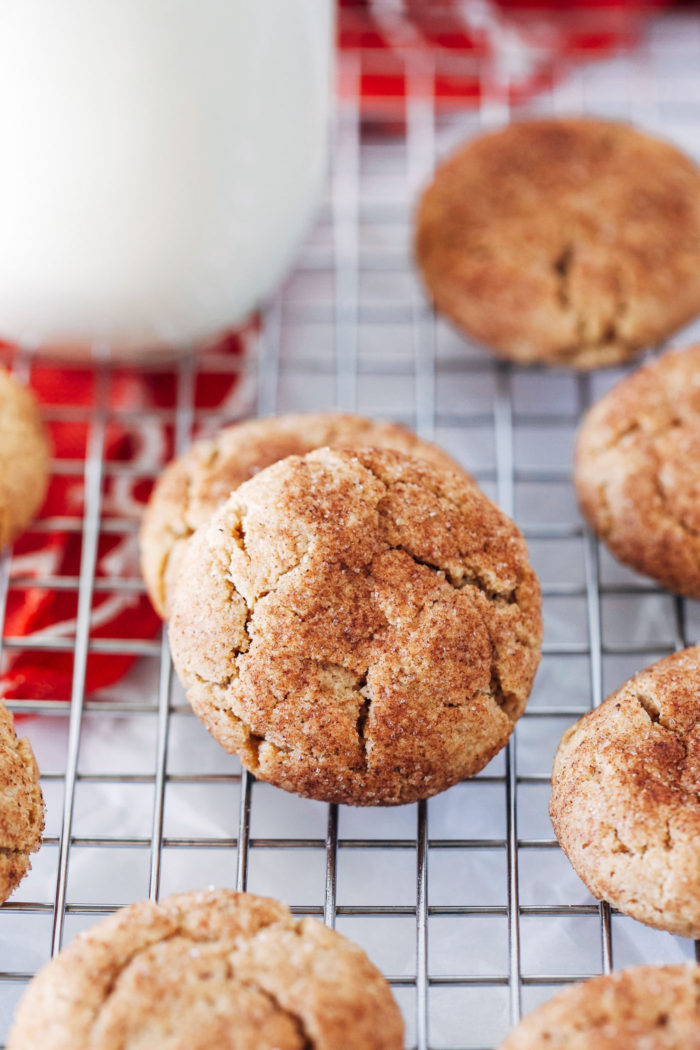 Okay seriously, you guys. These snickerdoodles are everything you could want and more. They don’t call for any eggs or butter and they’re made from whole grain, naturally gluten-free flours. However, the texture and the flavor is so incredible that you would never guess that they weren’t your grandma’s favorite recipe from way back when. I’m telling you, they’re perfect.

I based them off of my Almond Meal Chocolate Chip Cookies but used almond flour (shout out to my fave Bob’s Red Mill) instead of almond meal for a finer texture. I also tested them with both vegan butter and coconut oil. Both will work but I found the coconut oil gave them a slightly softer texture. 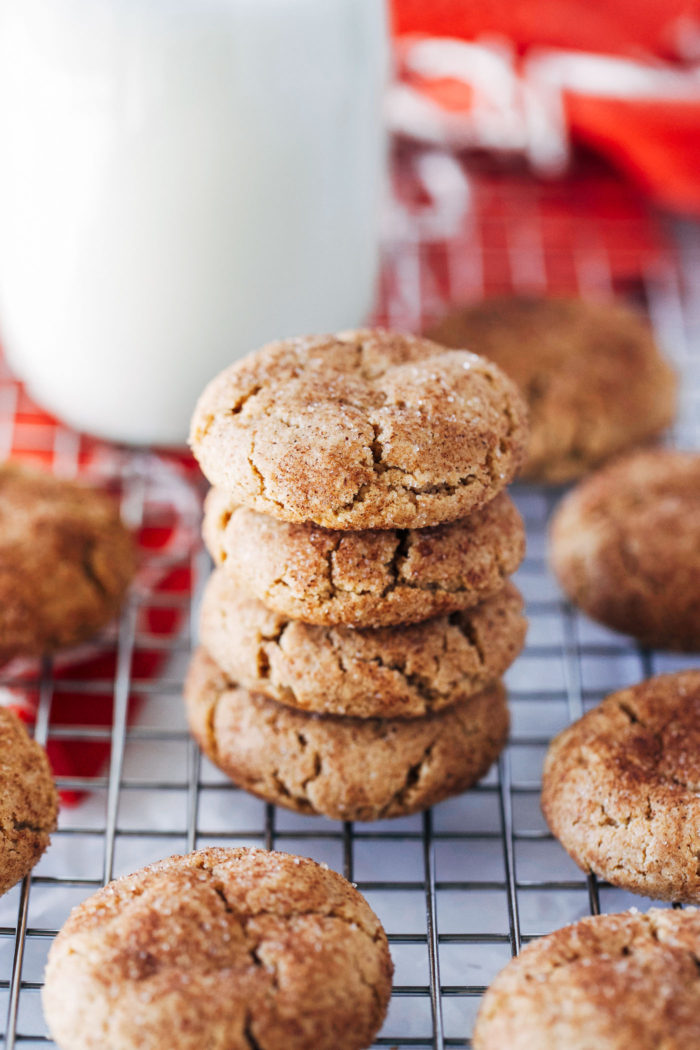 Speaking of texture, what makes these so great is that the edges are nice and chewy but the center is soft and pillowy. Finding that balance is not easy, my friends.

It took me a few tries to get them right and eventually I discovered that the trick is to under bake them. For me that means exactly 10 minutes, but it could be a little less or a little more depending on your oven. When you see them start to puff up and slightly spread out with just a few crackles on the top is when they’re just right! 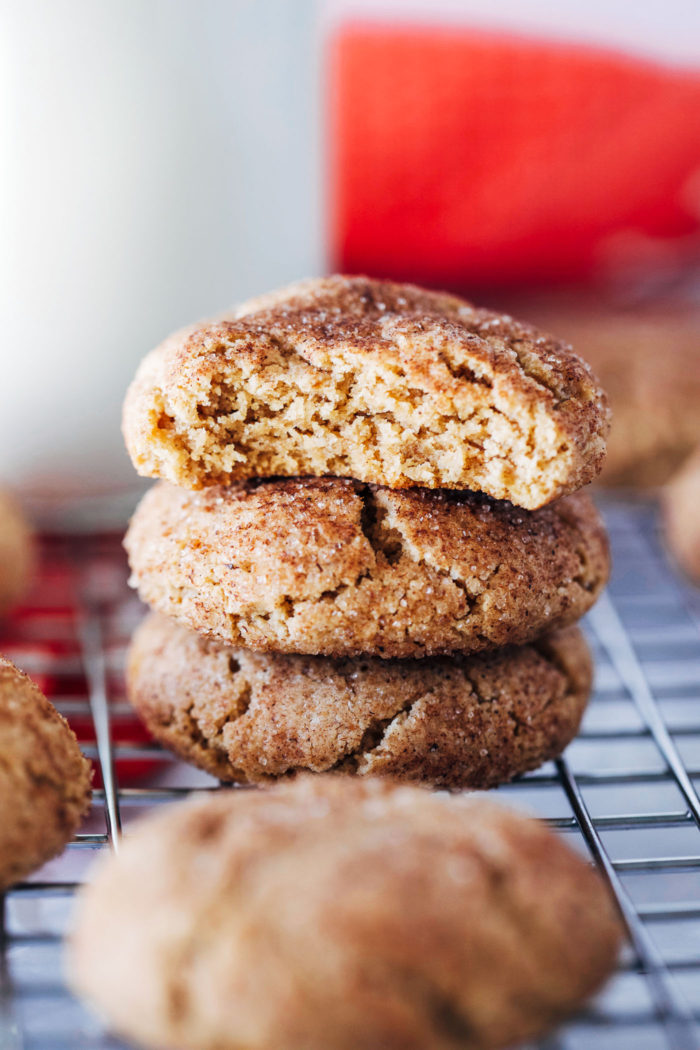 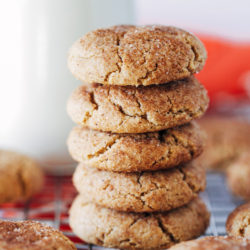 For the topping: In a small bowl, combine the cinnamon and the sugar. Stir to mix then set aside.

For the cookies: Preheat the oven to 350°F then line a baking sheet with parchment paper. In a large bowl, combine the almond flour, oat flour, cream of tartar, cinnamon, baking soda, baking powder and salt. Sift together then set aside.

In the bowl of a stand mixer with the paddle attachment (or a large bowl using a hand mixer), add the solidified coconut oil, coconut sugar, cane sugar, vanilla extract and almond milk. Cream together on high speed for about 20-30 seconds, until well-combined.

With the mixer running on low speed, add the dry ingredients to the bowl two parts. Allow to mix until a dough forms, for about 30 seconds. Use a spatula to scrape down the sides then mix again on high for 15 seconds. If the dough seems to dry/crumbly, continue mixing until a smooth dough forms. If it still seems to dry, try adding 1-2 tablespoons of plant-based milk and mixing again.

Take 1 and 1/2 to 2 tablespoons of dough and roll into a ball. Roll the dough balls into the cinnamon-sugar topping. Bake cookies for about 10 minutes, until they are puffy and just starting to spread. Be sure to peak through the oven door when checking on them rather than opening it and letting the heat out. If you cook them too long, they will spread too much.

Allow cookies to cool on the baking sheet for 5 minutes and transfer to a wire rack to cool completely. They might seem soft in the middle, that’s okay! As the coconut oil cools, the middle will solidify more. Store in an airtight container for up to 7 days at room temperature.

*Be sure to use certified gluten-free oat flour for allergies, such as Bob’s Red Mill.

**If coconut oil isn’t soft enough to scoop at room temperature, try microwaving it (without the lid) for about 10 seconds. This should make it so that it’s scoopable but still solidified enough. 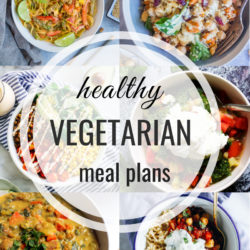 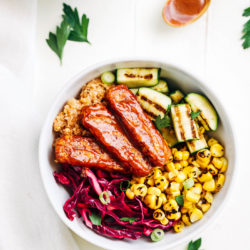