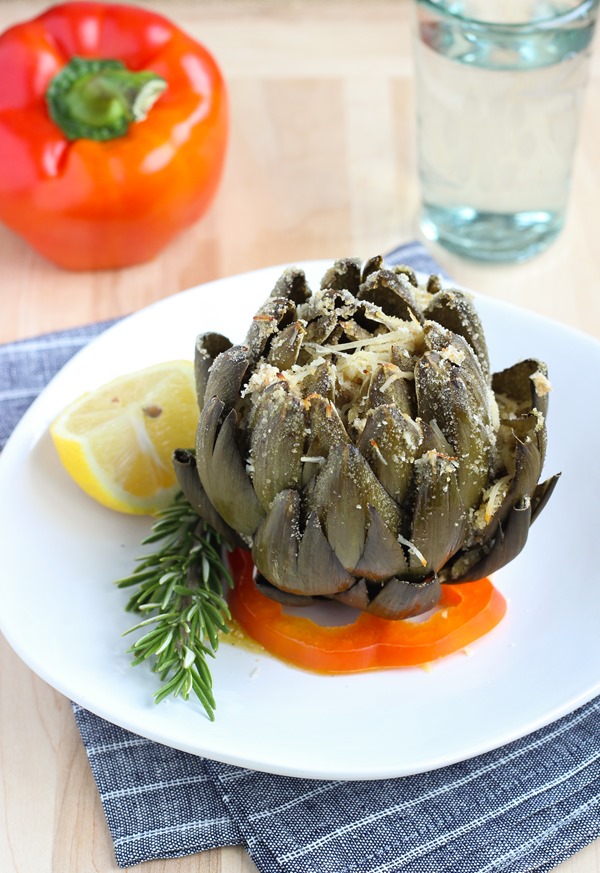 Partly because I didn’t have to lift a finger to prepare it but mostly because it comes from my favorite person ever. 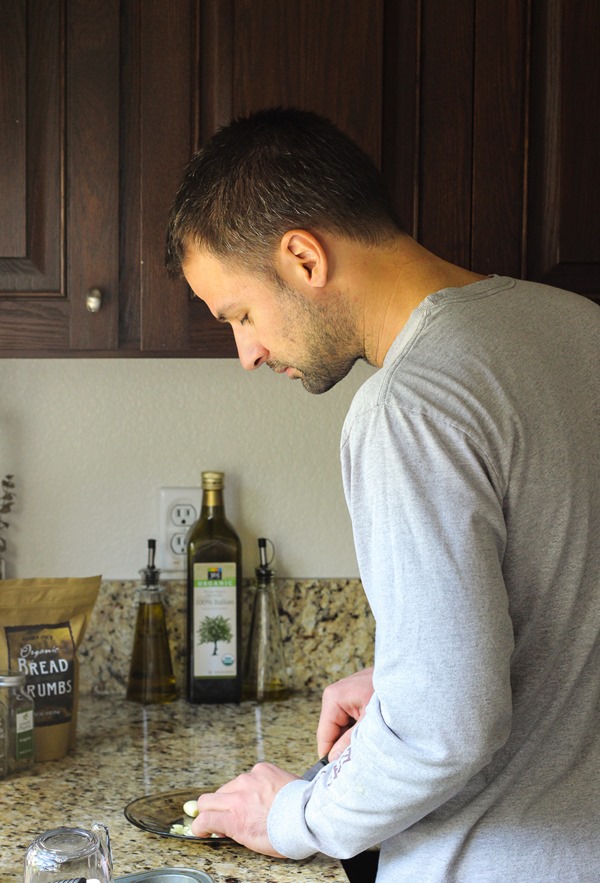 I have a tendency to complain vent to Brandon about how time consuming the blog is because as much as I love it, keeping up with it on top of a full-time job leaves me with almost no time to just kick back and relax. Honestly, if I were him, I would tell me to put a lid on it. No one is forcing me to do it. It’s completely self-inflicted.

Thankfully he’s much sweeter than I am and offers me endless amounts of encouragement and support. On top of that, he was even sympathetic enough to volunteer to do a guest post for me to help relieve some of my stress. Seriously, how did I get so lucky? 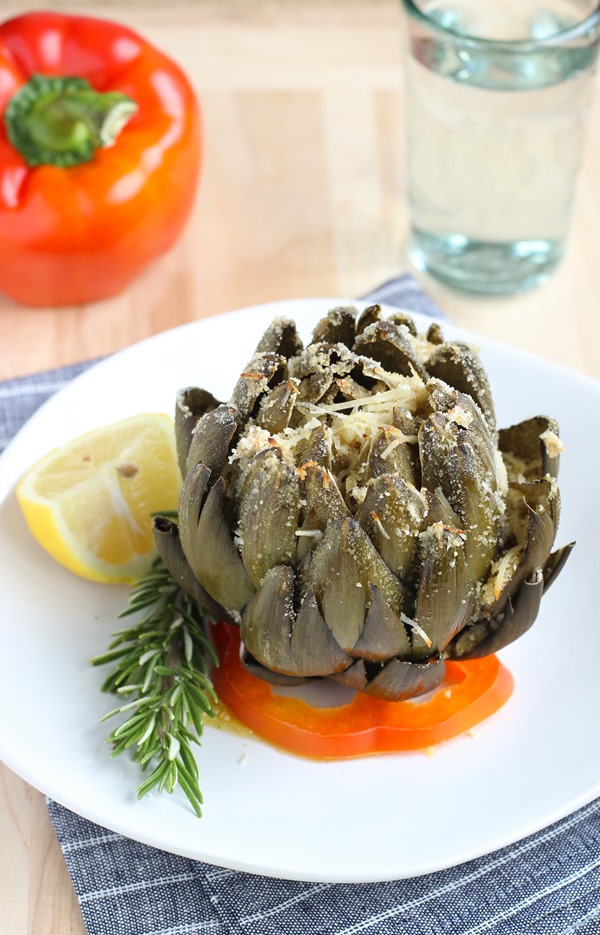 I left him to do the whole thing himself but he ended-up needing a little help with the photography. Apparently it’s not as easy as it looks.

He also had originally planned on writing the post for me but because he unexpectedly had to go in to work today, you’ll have to put up with me again.

So let me tell what I know about these artichokes. First off, artichokes are scary looking, right? Even though Brandon and I are both from Italian descent, my family never bothered with the whole artichoke. Actually it wasn’t until meeting Brandon that I learned people eat the entire thing.

They’re a tradition in his family and he’s made them almost every year that we’ve been together, which is eight and half…but who’s counting? 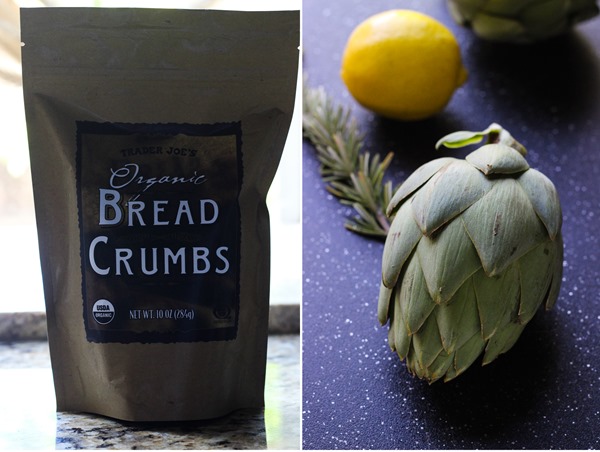 Even though they look scary, they’re actually fairly easy to prepare. After removing the stem and cutting off the tips of any thorny leaves with scissors, you steam them for about thirty minutes. 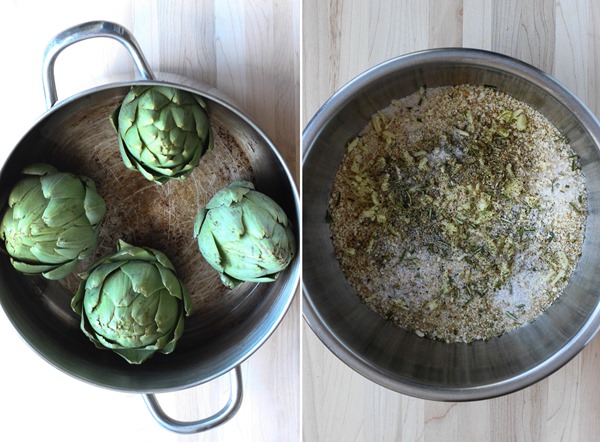 Once they’re done steaming, you remove them from the pot, press down on the center with your thumb so that it spreads open like a flower, and fill it with stuffing {lemon, olive oil, breadcrumbs and seasonings} before baking for 10 minutes.

Then voila! A perfectly tender artichoke awaits you. 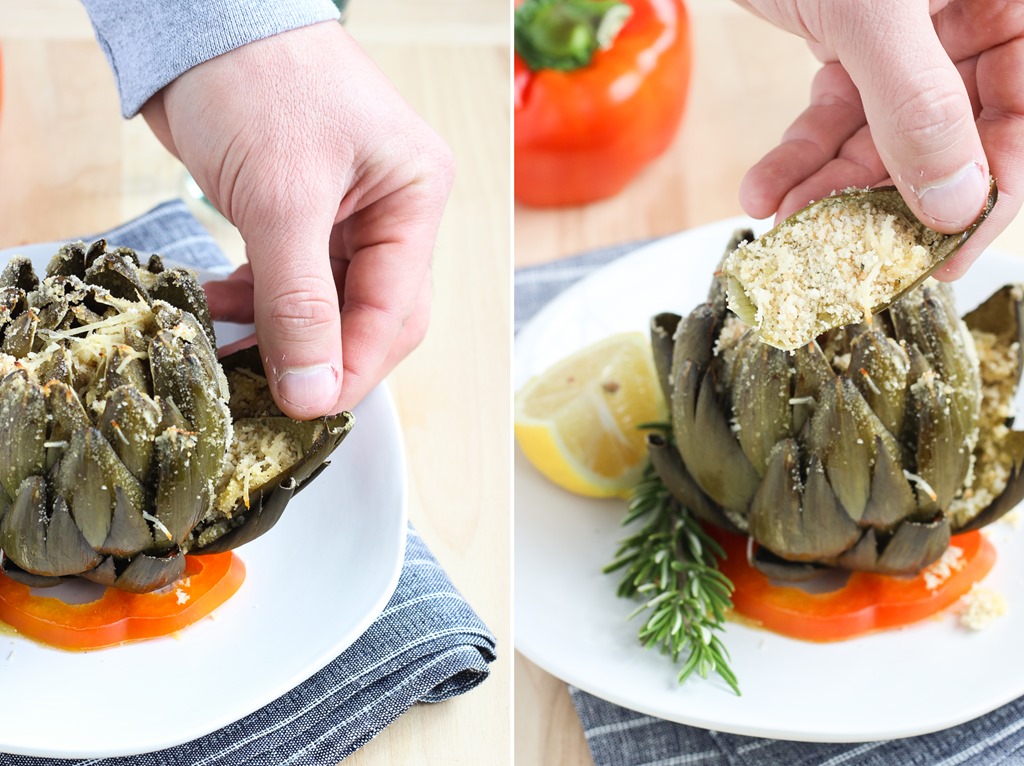 By the way, if you’ve never eaten an artichoke, it takes an immense amount of patience. For me, at least.

I like to inhale my food but you are forced to take your time and savor each and every leaf before getting to the best part…the heart!

We didn’t take pictures of the heart but trust me when I say that it will blow you away. Eating a fresh, juicy artichoke heart is so much better than the ones that have been sitting in a jar for who knows how long. 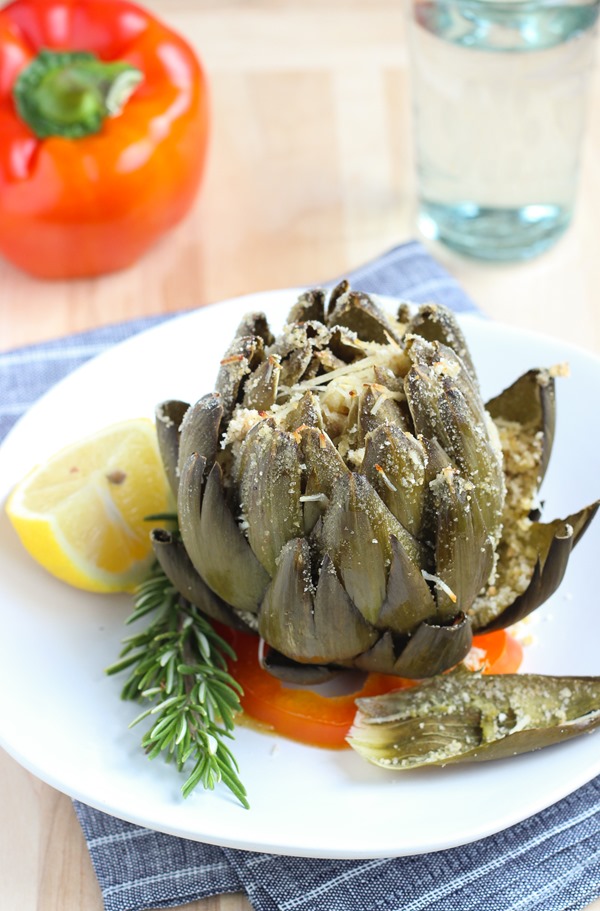 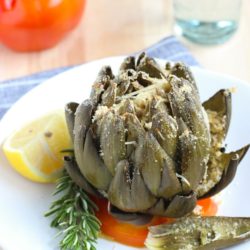 Cut stems off the bottom of each artichoke so that they are able to stand straight up on their own. Using kitchen scissors, cut off any thorny tips of the leaves. Place all four of them in a large pot filled with just enough water to cover a half-inch of the bottoms of each artichoke. Bring to a boil then cover with a lid and steam for 30 minutes.

Meanwhile, combine the breadcrumbs, minced garlic, salt & pepper and herbs in a medium-sized bowl. Preheat the oven to 300°F.

When artichokes are done steaming, remove from the heat and allow to cool. Remove from the pot and place on a lined baking sheet then press down on the center of each so that they spread open like a flower. Drizzle each one with the olive oil (about 1/2 tablespoon for each) then squeeze the juice from half a lemon in each. Fill each one with 1/2 cup of breadcrumb mixture and top with shredded cheese. Bake in the oven for ten minutes, until cheese is light golden brown, then serve. 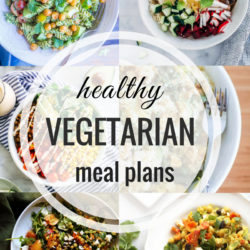 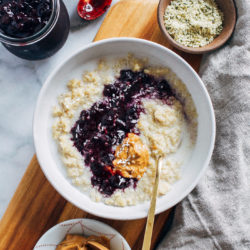 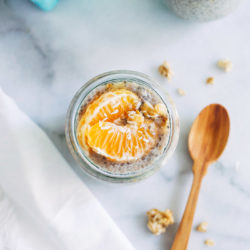