Disclosure: As of January 12, 2018 I have received notice from Hana Highway Regulation that Red Sand Beach and Waioka Pond are on private property and should not be accessed by tourists. This post is not intended to promote this sight, simply to share a memory that I have of our honeymoon there. Please be aware that you will be fined if you trespass on private property. 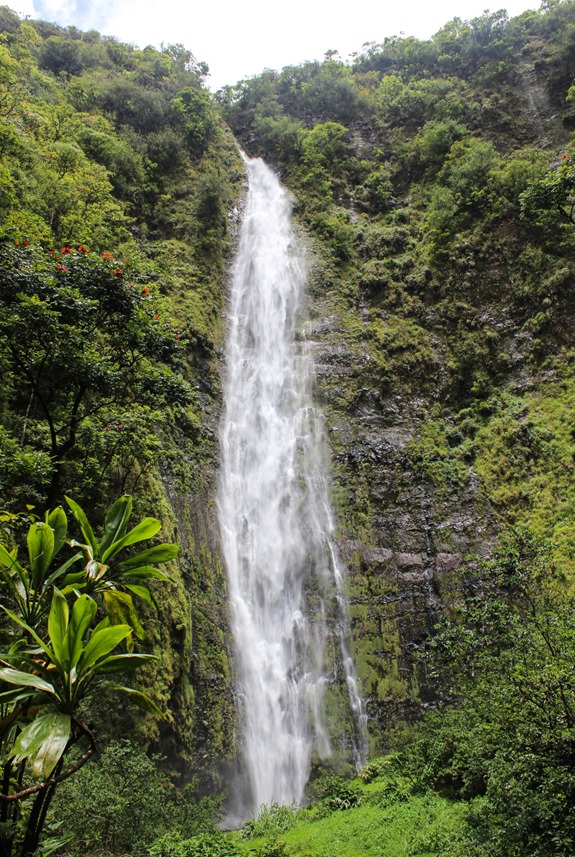 Our second day in Hana was just as incredible as the first, if not better. The hotel we stayed at offered a continental breakfast that they deliver to your room and it included hard-boiled eggs, yogurt, fresh fruit and the most amazing banana bread ever. It was the best on the island, in my opinion.

The first destination on the list that day was the Red Sand Beach which was only a few miles from our hotel on Hana Bay. The trail to the beach was a little challenging {I wouldn’t recommend doing it during long periods of heavy rain} but we made it through without any problems. 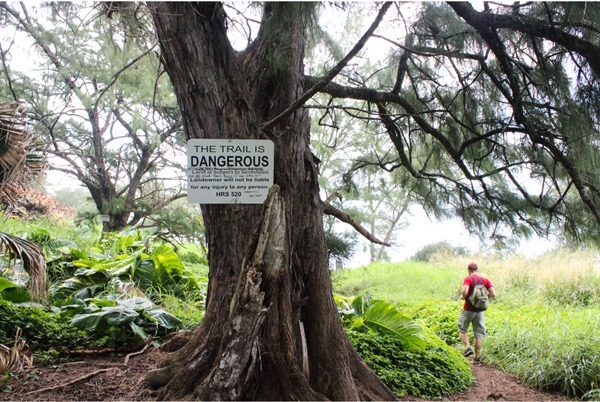 Besides, what you find at the end of the trail is well worth the trouble. 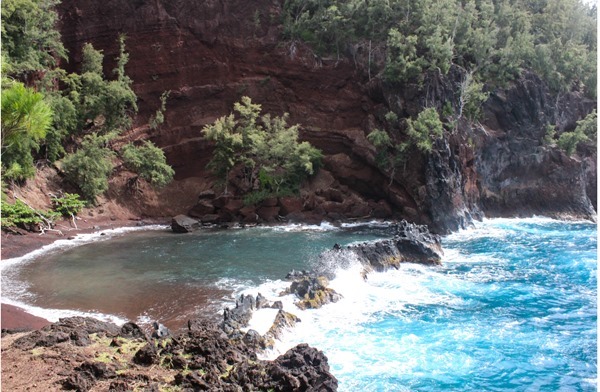 The beach almost looks like it was purposely carved out of the mountain and the color of the red sand against the bright blue water is a sight to behold. 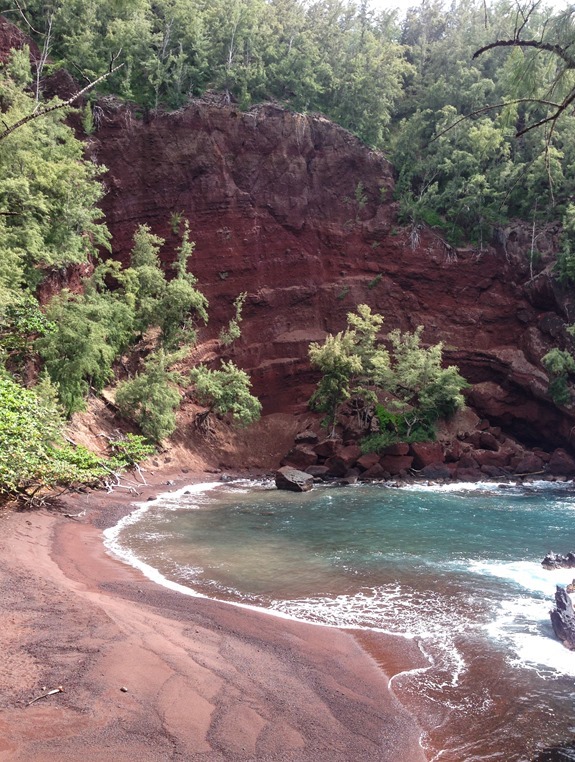 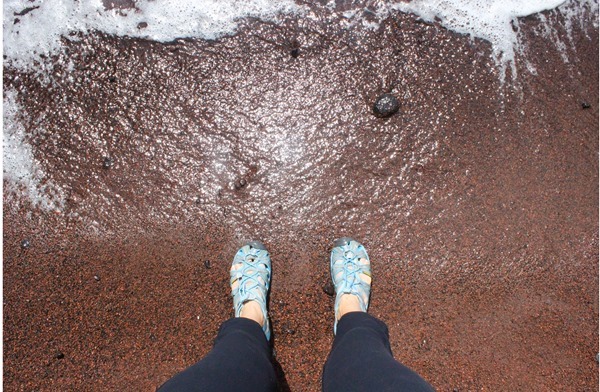 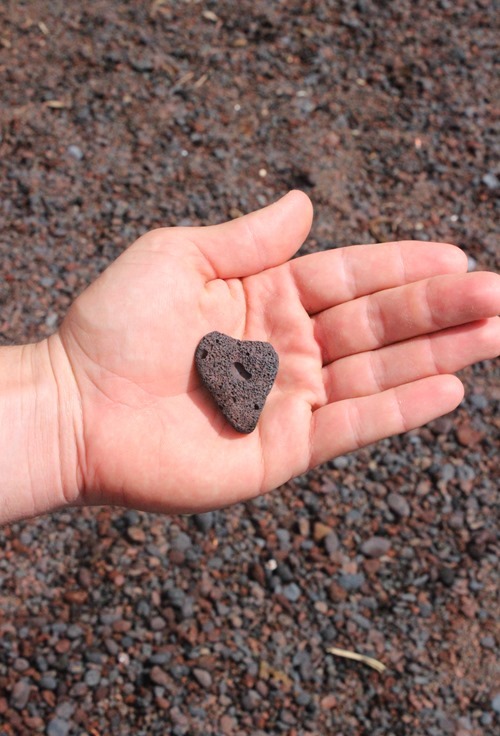 From there we started the drive towards Haleakala National Park and stopped off at the ONO fruit stand along the way. I really wanted to take a tour of their organic farm but due to bad planning on my part, they were closed on the day we stayed in Hana.

The fruit stand was the next best option and fortunately they had a really nice selection. We got to try a few new things, including rambutan and star apple. The girl working the stand instructed us not to touch our lips to the outside of the star apple because the latex in the rind would make them feel sticky. 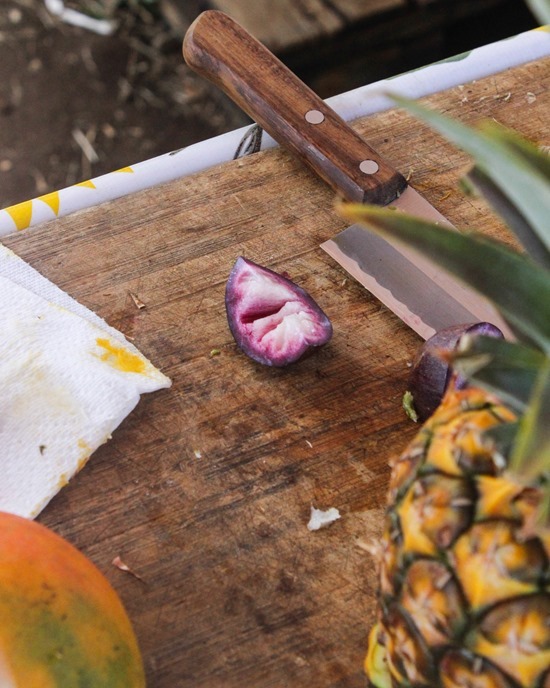 Well, that’s easier said than done and we both got it on our lips which wasn’t the most pleasant sensation. The latex smell wasn’t my favorite either. :/

However, the rambutan was delicious!  It was a perfect snack during the ride. All you have to due is break it open and enjoy… 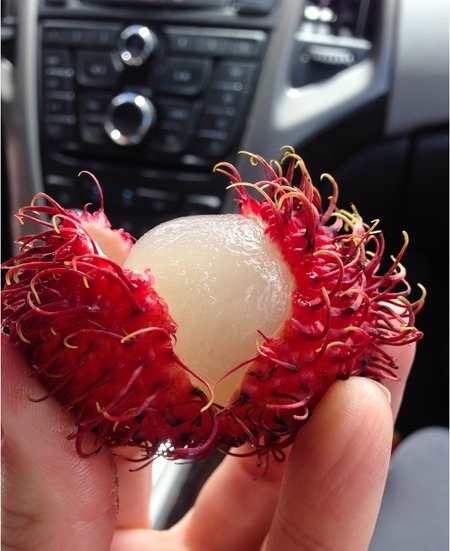 After that we were on our way to Haleakala National Park, where we the weather turned cloudy with intermittent light rain showers. We parked the car and then took the short ten minute hike down to the O’heo Gulch, a.k.a The Seven Sacred Pools. 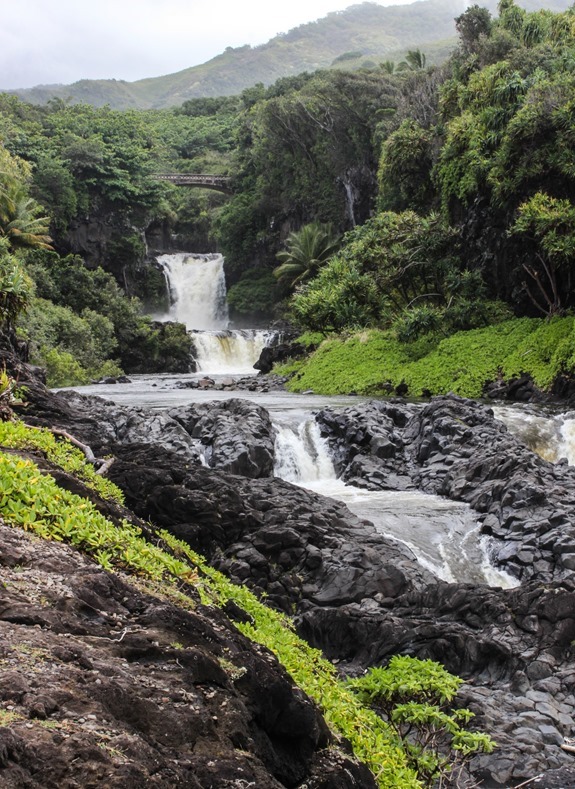 Apparently there aren’t really seven pools, it was just a name that was made up a long time ago to increase tourism to the area.

The pools were closed that day since the falls were flowing strong due to the recent rainfall. This made perfect sense to me, considering the water was gushing straight towards lava rock and the dangerous ocean tide. 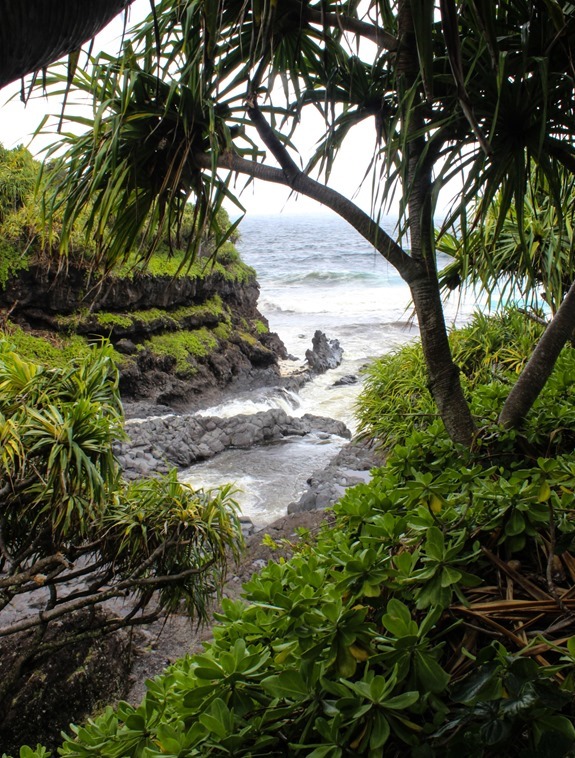 Haleakala National Park is also home to Pipwai Trail which is a 4 mile round-trip hike that leads through a bamboo forest. It was so cool to listen to the sound of the bamboo knocking into each other as the wind blew during our hike. 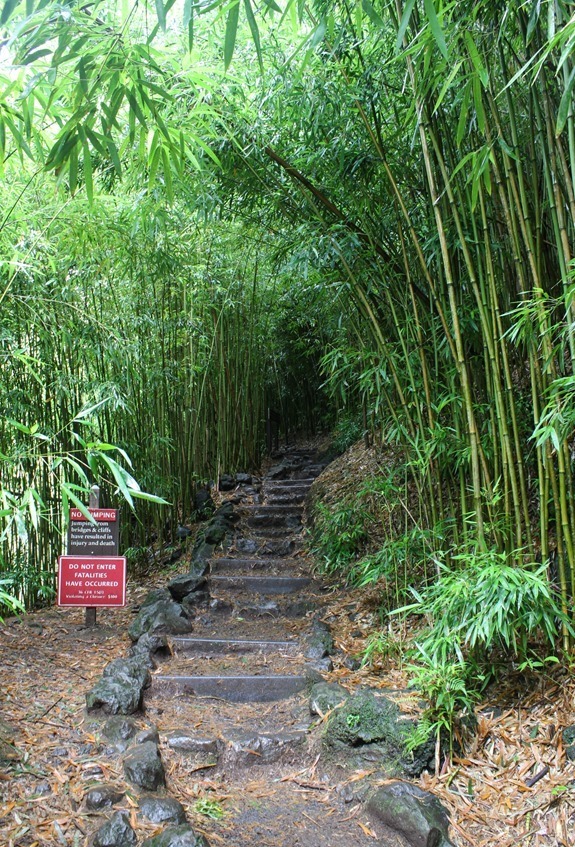 The main highlight of this trail is at the end but along the way there are also plenty of beautiful sights to see. 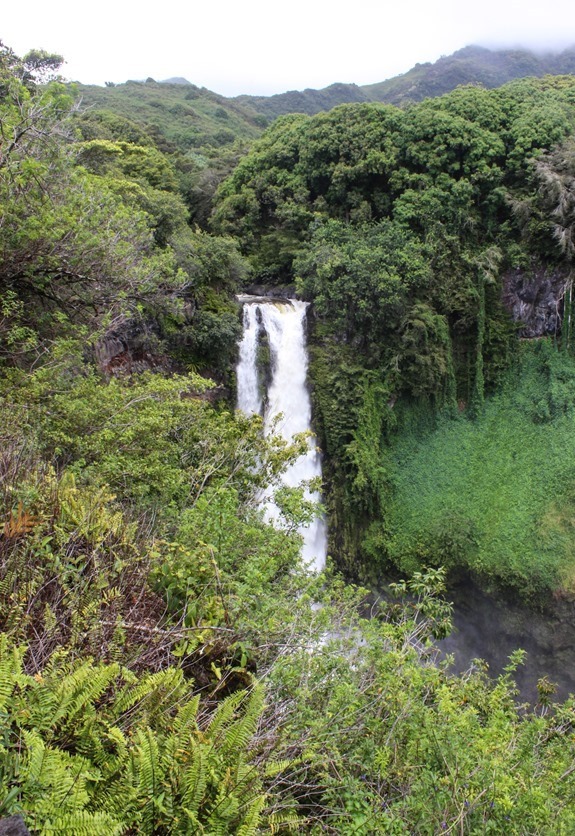 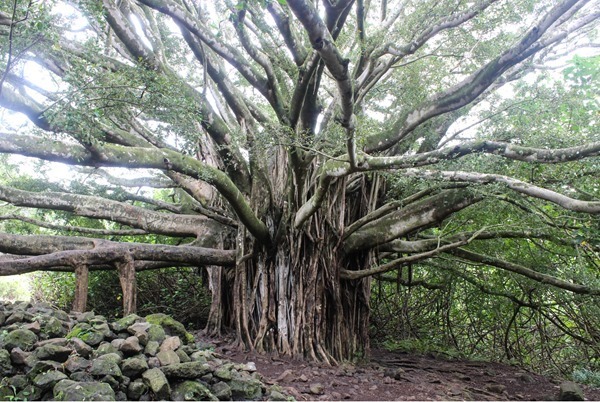 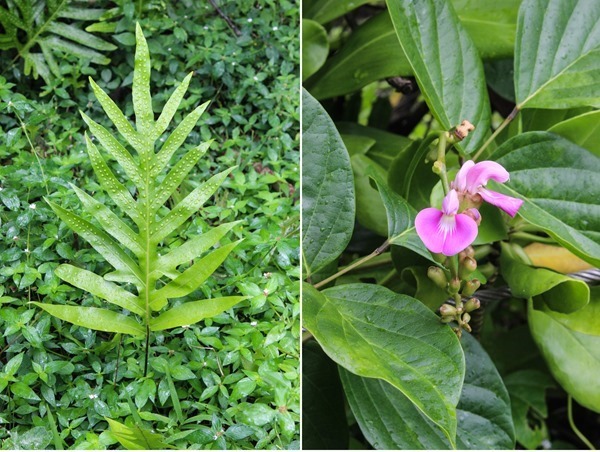 At the end of the trail you finally reach the big daddy, a 400-foot waterfall known as Waimoku Falls. 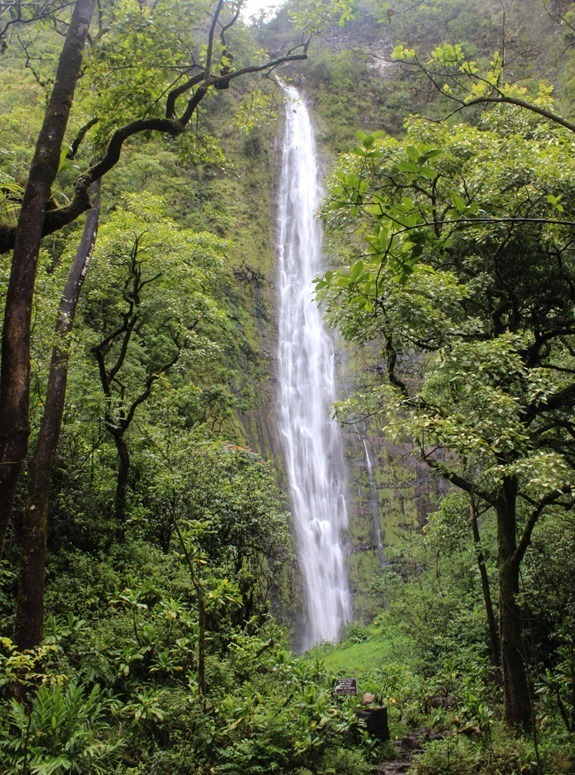 If you look closely you can see a sign at the bottom telling which tells hikers not to venture past that point because people have been killed by falling rocks. Yes, we went past it just a little bit but not very far.

After hiking the trail back to the car, we back-tracked on Hana Hwy to Pranee’s Thai for lunch. 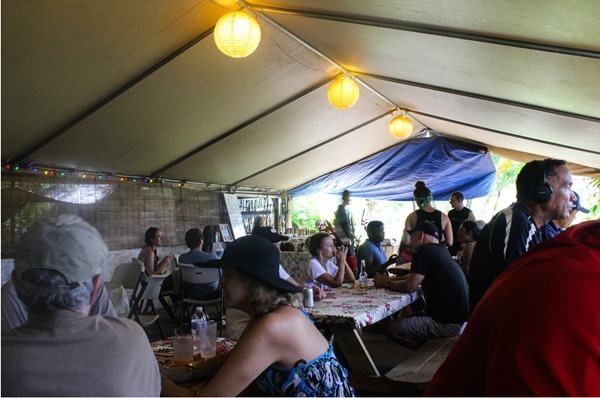 Brandon and I both agreed that this was some of the best Thai food we’ve ever had. Everything was so incredibly fresh. We started with a HOT {as in spicy} green papaya salad and I also had the Pad Thai which was to-die-for. 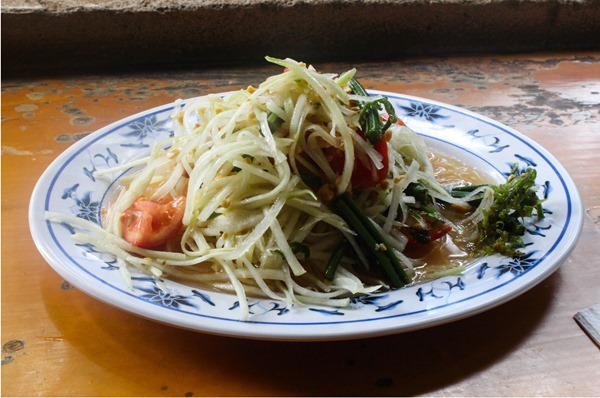 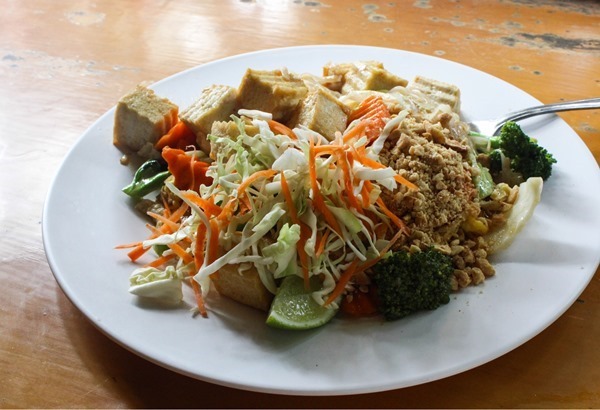 If you like Thai food and happen to find yourself in Hana, I highly recommend a stop by Pranee’s!

After lunch, our plan was to head toward Wailea, where we stayed for the last two days of the trip. We took the back road out of Hana and made a few more stops along the way, including Waioka Pond, a.k.a Venus Pool right by mile marker 48.

The water there looked stagnant so we didn’t stay long but we did get a picture of Brandon with a coconut! 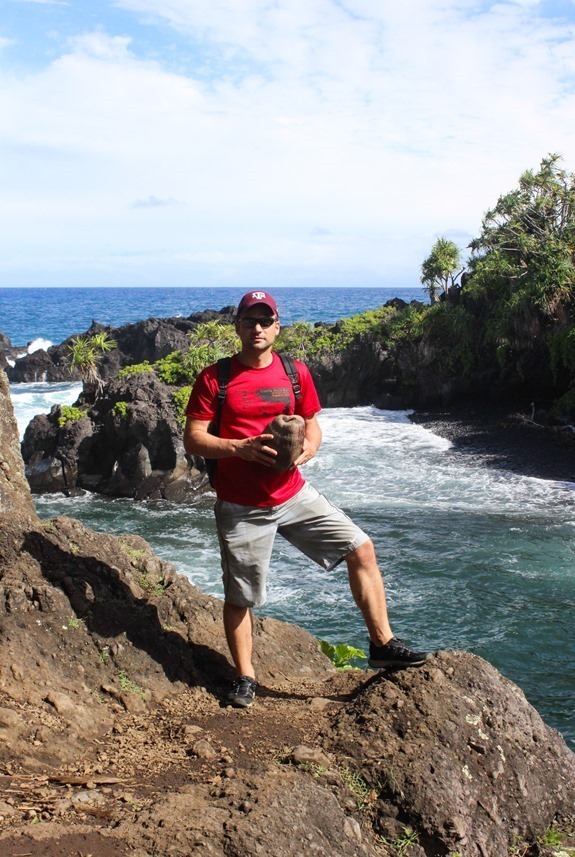 Then we went to Alelele Falls which is right past the 39 mile marker, next to the Alelele bridge {after Hana Hwy becomes Pi’ilani Hwy}. 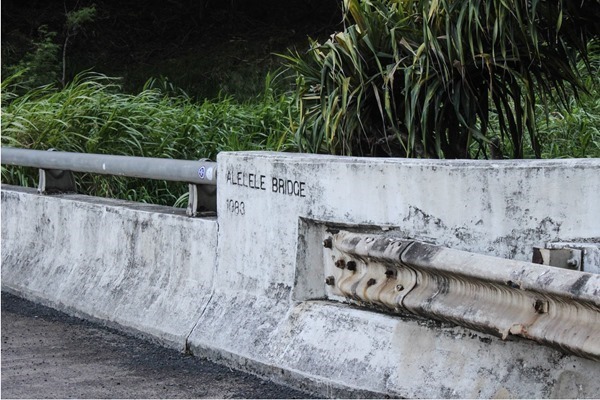 The hike to the 50-foot waterfall only takes about five minutes and leads through a patch of pineapple trees and then across the stream. 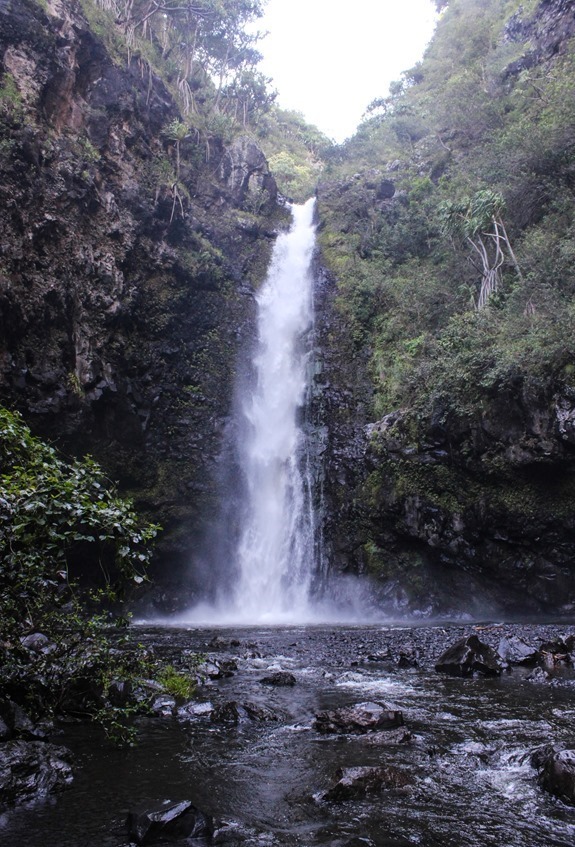 This was the last waterfall we saw in Maui so I was really hoping to swim in it but the flow was too strong. Instead I settled for sitting in the stream and getting my hair wet. The water was ice cold but it felt great! 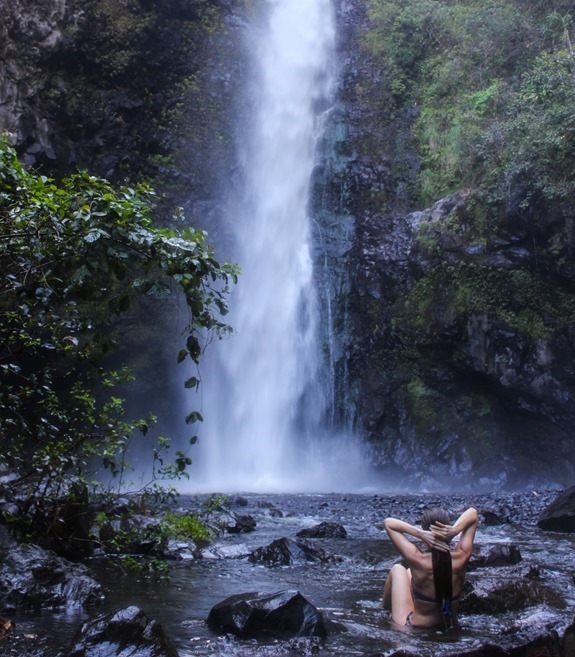 Technically, we did see one more waterfall as we were driving toward Wailea. During one of the turns, we looked back and saw one flowing right into the ocean. 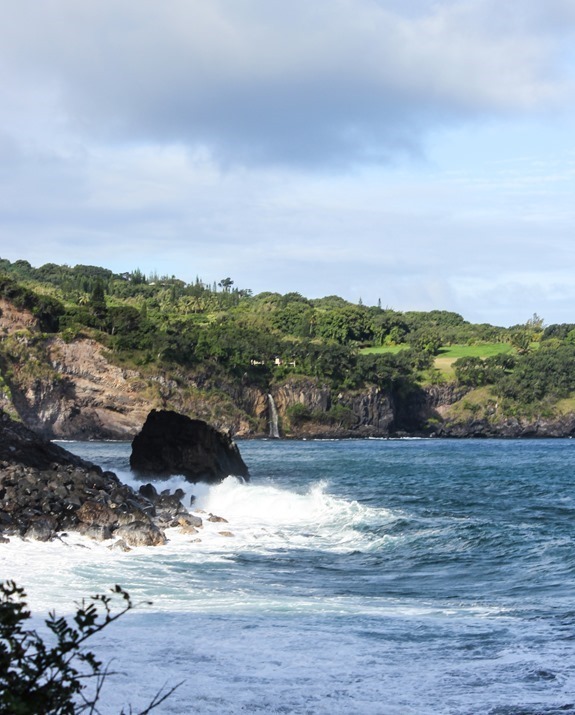 After that point, the island starts to drastically change. Most of the greenery disappears and the land becomes dry and desolate. The way the sun cast itself on the back of Halekala almost made it look like we were on another planet. It was unreal. 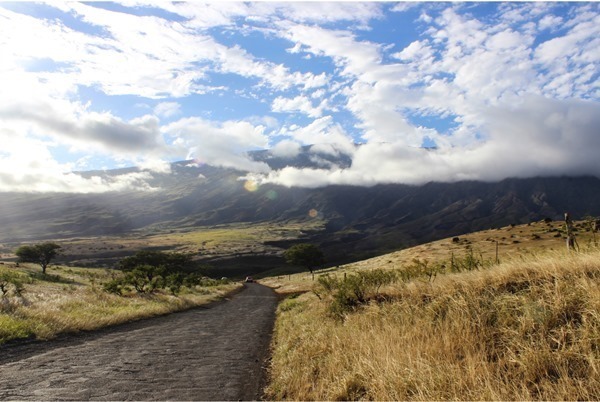 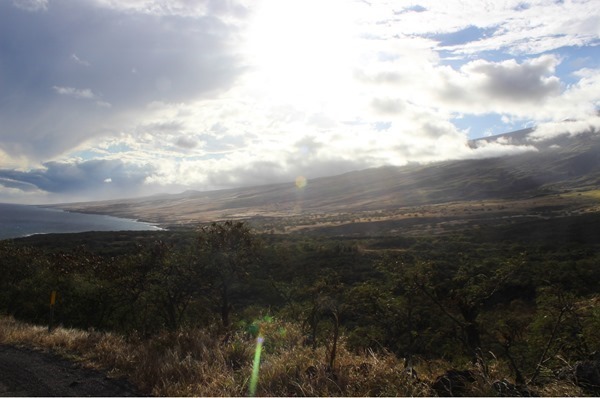 There was so much from that drive that I didn’t capture with my camera so be sure to take that way out of Hana if you ever go. It was a once-in-a-lifetime experience! 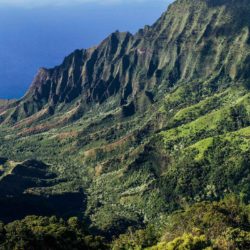 Where to Eat, Play & Stay in Kauai 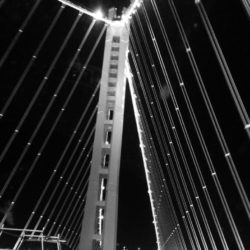 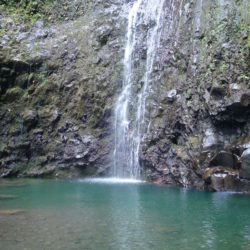