Day In the Life (Newborn Edition) 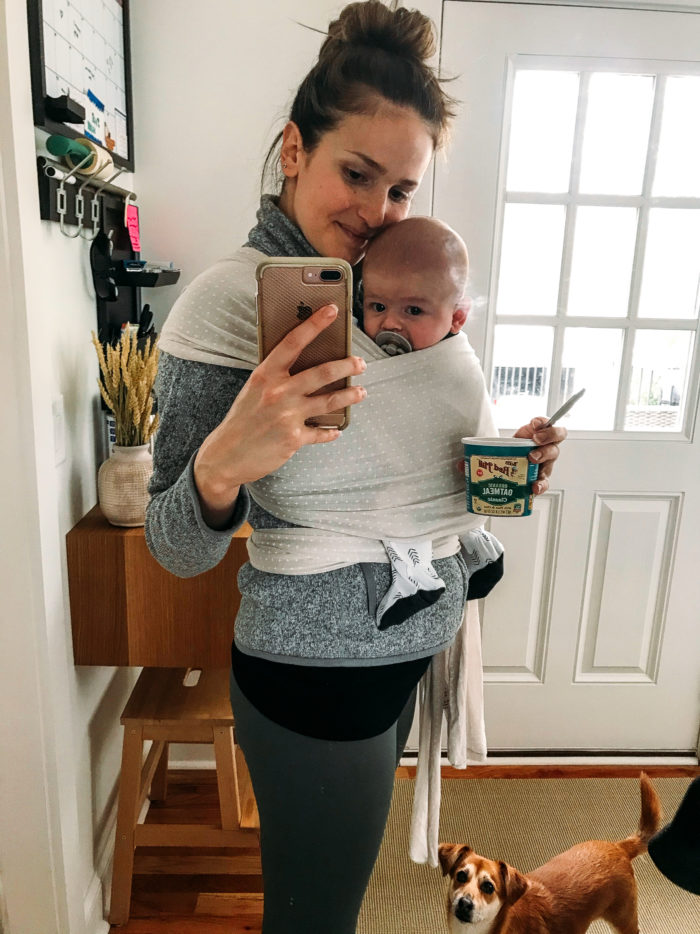 This post was created in partnership with Bob’s Red Mill

I’m very much a planner and thrive on routine but having a newborn has taught me that my days will pretty much never go as planned. No matter how hard I try, every day is different depending on how well he sleeps, how cranky he is or what we have going on outside of the house. I just try my best to squeeze in as much as I can whenever I can.

Now that I’m coming to the end of content that I had prepared for my (semi) maternity leave, I’m starting to wonder how the heck I’m going to have time to photograph recipes with this little guy around. I guess I’m banking on the idea that their naps get more reliable after the third month. Did I just make this up or is it really a thing? I’m sure I’ll find out soon enough.

In the meantime I thought it would be fun to share a day in the life post, including what I eat because this is a food blog, after all. I’ve been snacking a ton while breastfeeding because it makes me so hungry. You’ll see that I spend an average of two hours pumping every day and that’s because I started exclusively pumping when Grant was one month old. Trust me, it wasn’t a decision that came lightly for us. The day I documented below actually went pretty smooth. Depending on how well he naps there are times that I have to get up in the middle of pumping to soothe him and I’ve spilled milk all over the place trying to pick him up with flanges attached to my chest. Or I’ve had to stop altogether when the only place he is content is sleeping on me. It can be hard on the both of us but I’m trying my best to make it work. 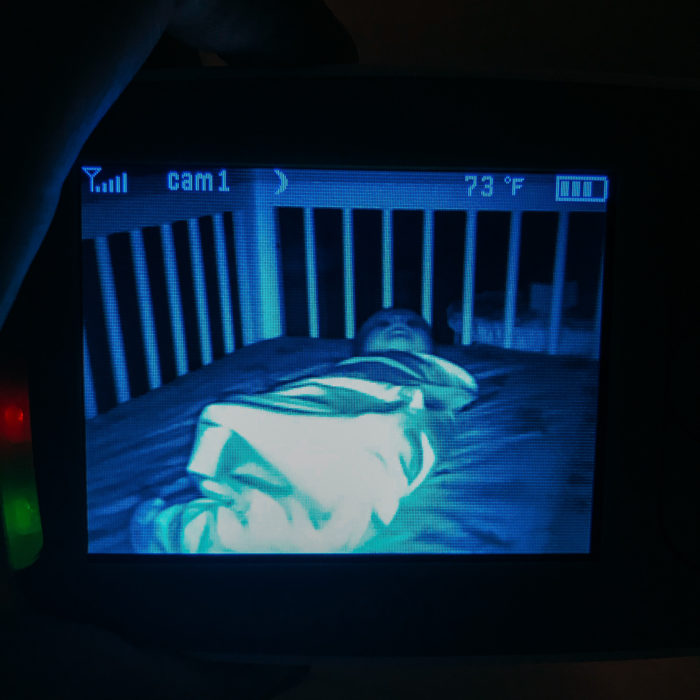 445am I hear Grant let out a few intermittent cries. I peek at the monitor and see that he’s not fully awake yet so I lay my head back down and try to sleep a bit longer.

530am I hear him cry again so I get up and go give him his pacifier. He sleeps really light during the early morning hours and wakes up between sleep cycles but with a little help I can usually get him back to sleep. Sometimes all it takes is giving him his pacifier, other times we have to pick him up and hold him until he falls back to sleep. The pacifier worked this time so I head back to bed to rest a little longer.

615am My breasts feel like rocks so I decide to get up and pump while I wait for him to wake up. After 30 minutes I tip-toe into the kitchen to put away the milk and shove a green monster muffin in my face. 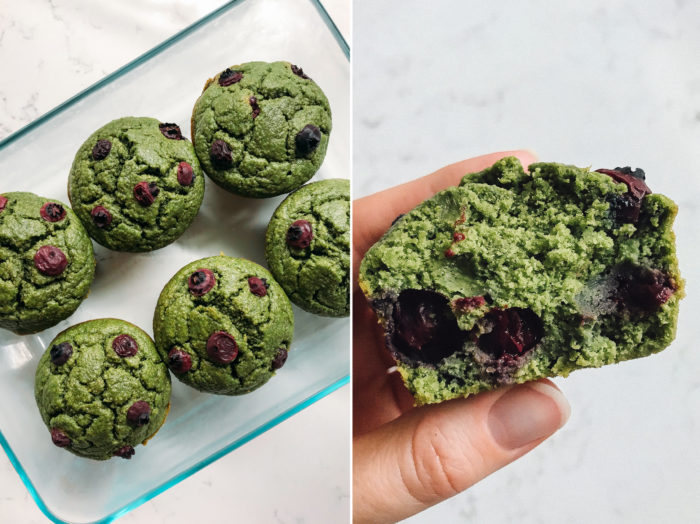 655am He starts to stir again so I leave the pump parts and bottles to be washed later on. I go in and unswaddle him, letting him stretch while I open the blinds and cheerfully tell him good morning. Then I pick him up so we can go say good morning to daddy, the puppies and the rest of the house. 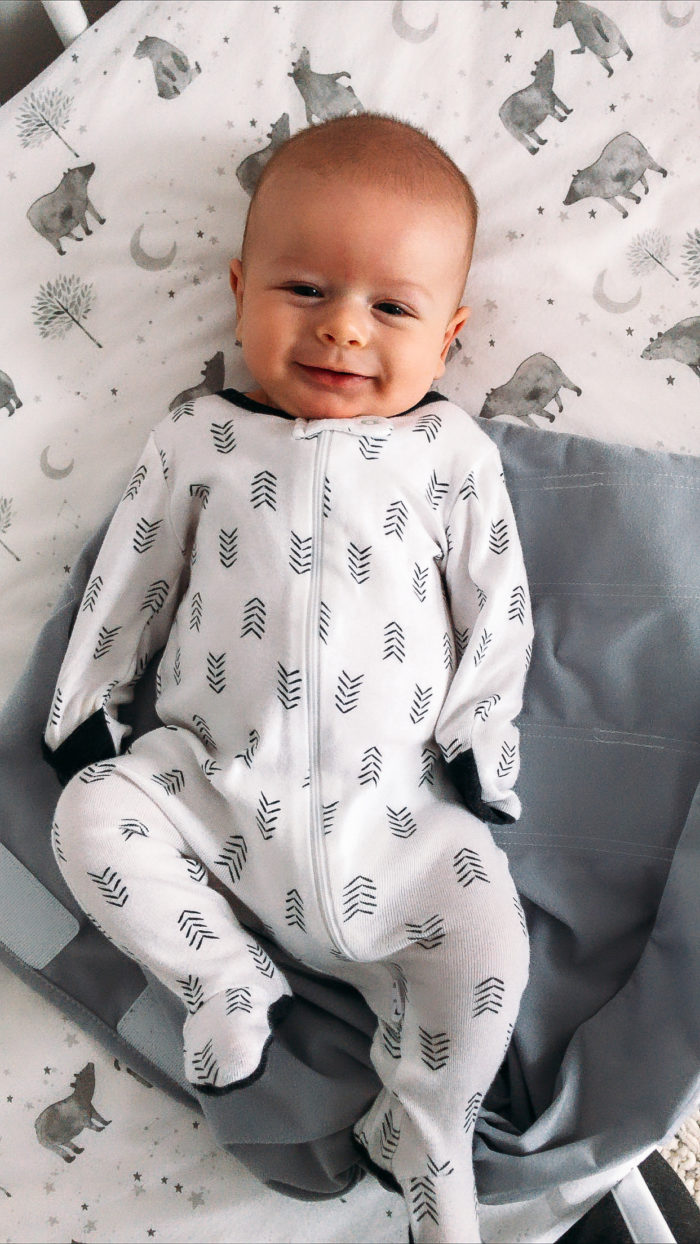 715am Now that we’ve said hello to everyone and he has a clean diaper, it’s time to eat. I feed him a bottle of milk, burp him, then read him a book so that he’s upright while he digests. One of my friends got us this book and it’s so cute. He loves it! 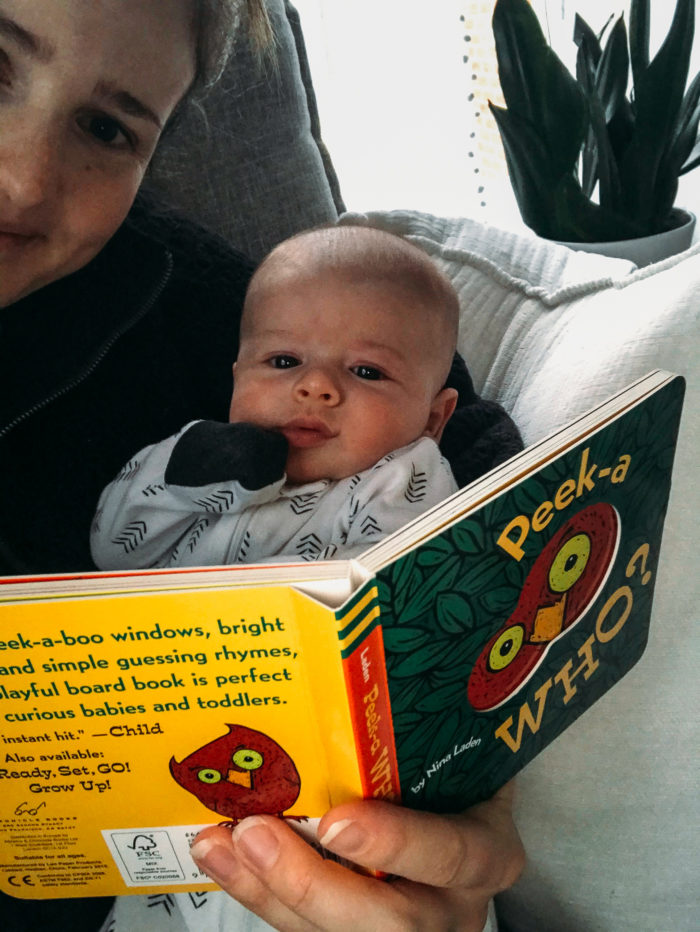 800am I put him in the baby wrap while I try to scarf down breakfast. Lately I’ve been loving Bob Red Mill’s Organic Classic Oatmeal Cups because all you have to do is add hot water, wait a few minutes and it’s ready to eat. I top it with sliced banana, peanut butter and hemp seeds which makes for a surprisingly filling meal.

I used to take the oatmeal cups with me whenever I would travel and was unsure if there would be healthy plant-based options because they’re so convenient. Looking back I wish I would have thought to bring some to the hospital with me when Grant was born. Hospital food is not exactly my cup of tea. 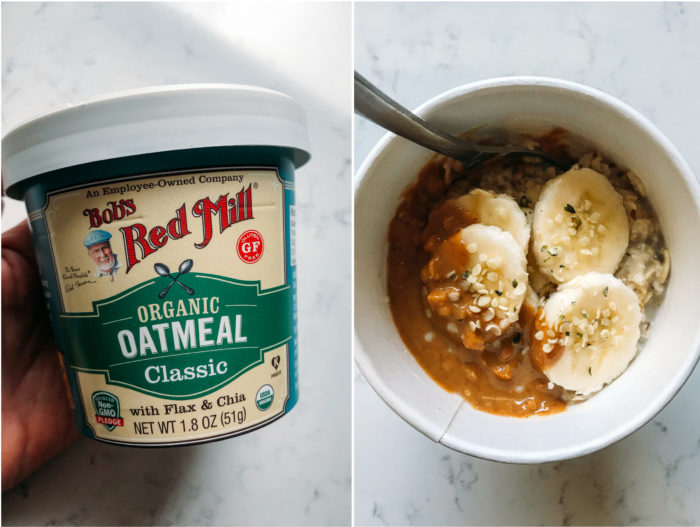 830am We spend a little time on his play mat until I see him start to yawn and rub his eyes. I swaddle him, turn on his sound machine and put him down for a nap in his crib.

900am I head back to the kitchen to tackle the pump parts and bottles from last night and this morning. Unfortunately this is just a fraction of what I have to wash every day. 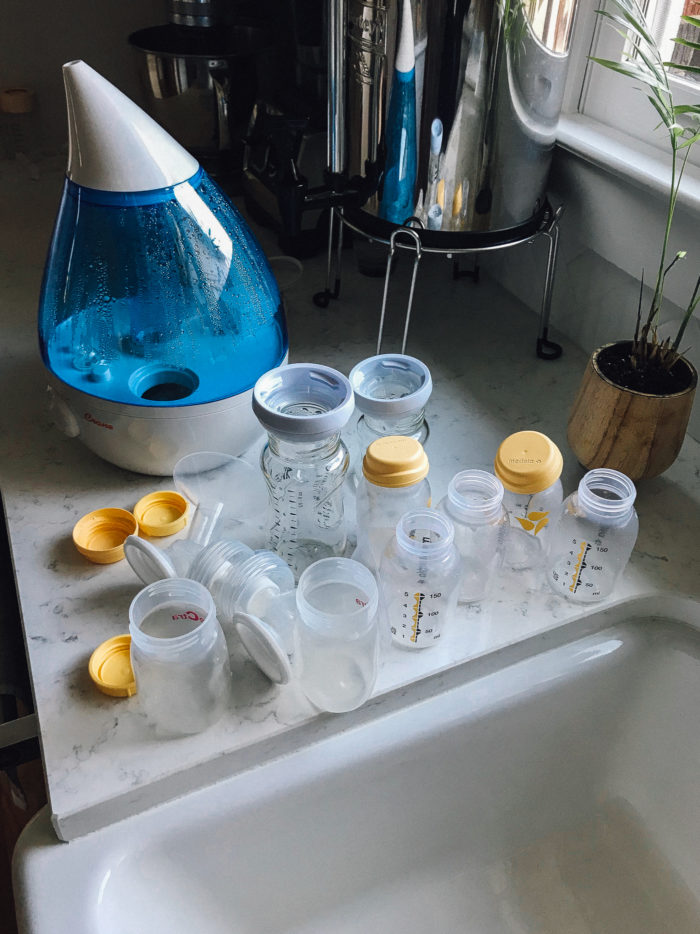 930am Once I’m done cleaning up the kitchen I sit down for another pumping session. I try my best to make good use of my time when I’m pumping and today I’m forcing myself to focus on writing a post rather than mindlessly watch Instagram Stories. 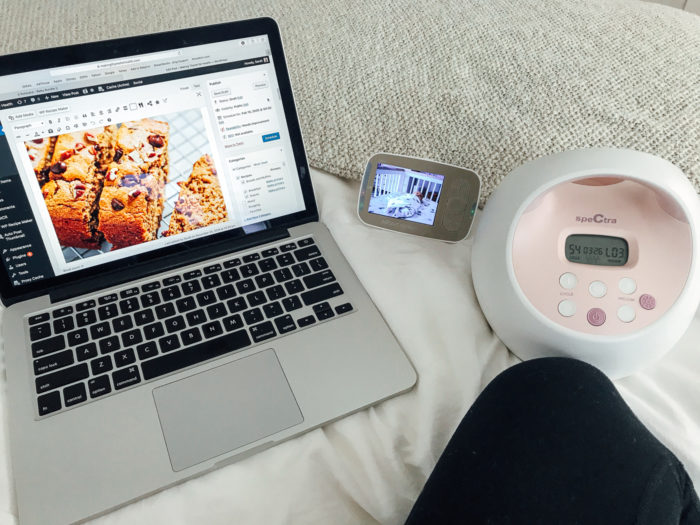 1015am Time to feed again! We sit on the couch so I can watch whatever shows I have recorded like The Bachelor or American Idol. Clearly I have sophisticated taste in television.

1045am After burping him I set him in his bouncer and talk to him for a bit while he digests. He gives me lots of smiles before he has a blowout in his diaper. I must have put his diaper on wrong because it goes everywhere and I have to change his outfit and wash the seat cover. He’s lucky he’s so cute! 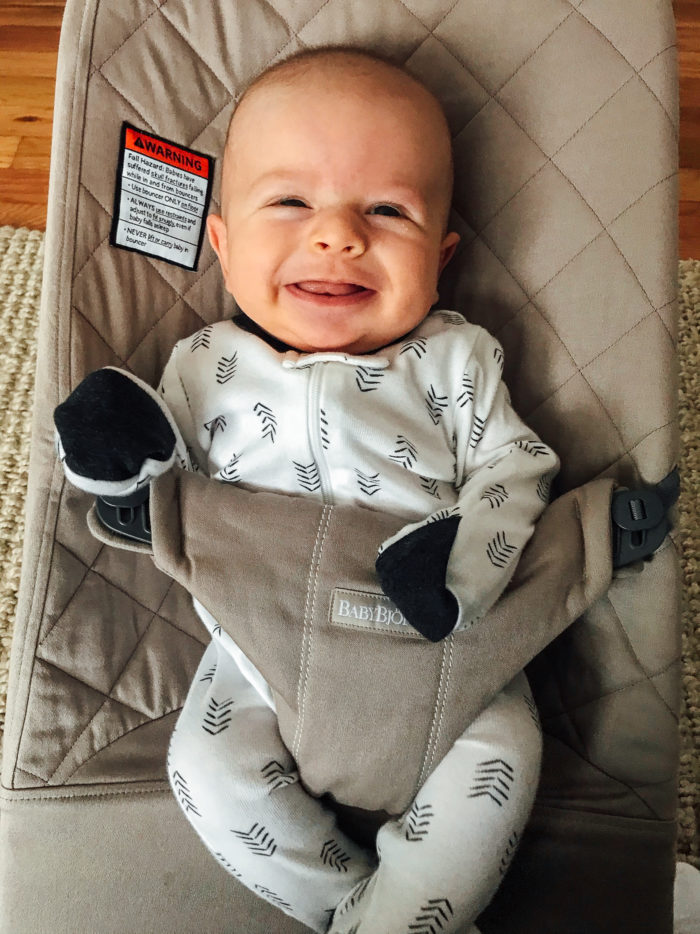 1115am After that’s all settled, we head to his room to spend time on his play mat again. He loves staring up at the contrast cards and we get lots of smiles and coos during play time.

When I turn him over for tummy time he’s not so happy but we still try to get a few minutes here and there every day. Just until he gets fussy. I don’t know why but he is not a fan of tummy time! 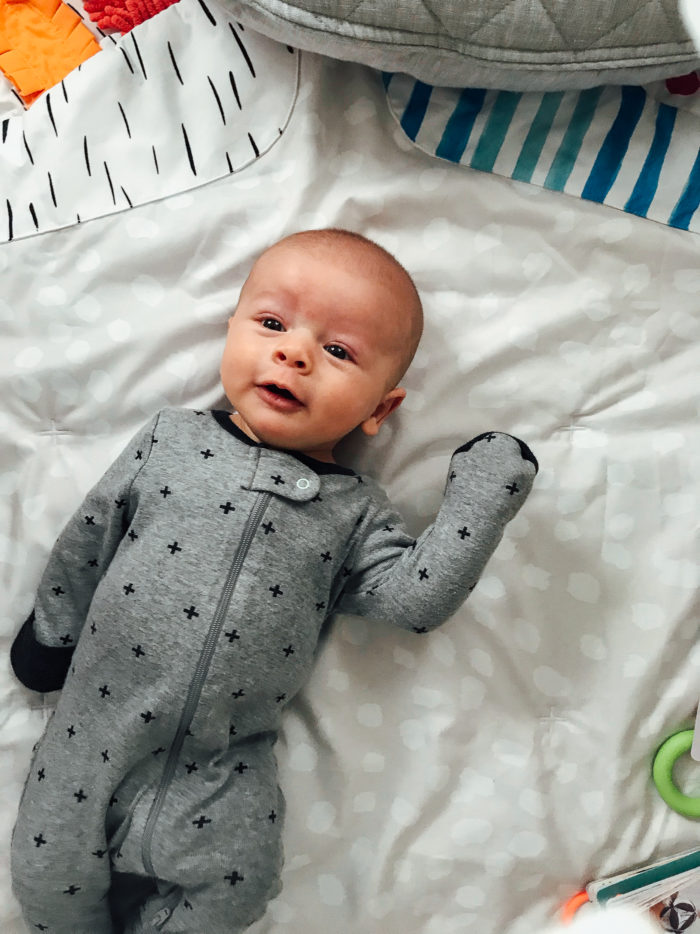 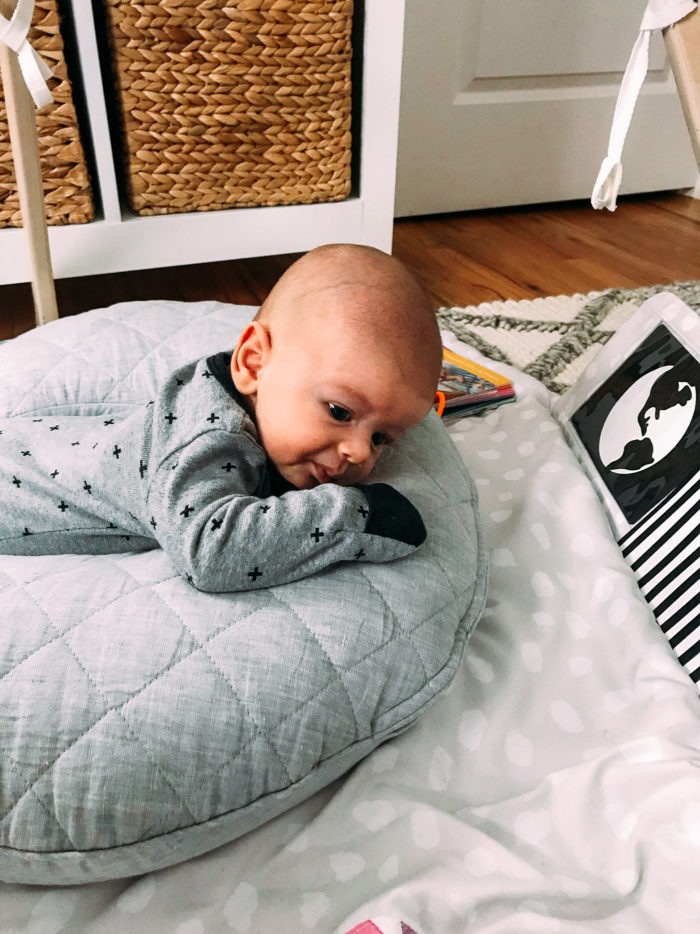 1145am He’s starting to get cranky so I change his diaper and rock him in the glider until he looks sleepy. I swaddle him and put him down in his crib for his second nap of the day.

1205pm I take this time to do laundry while watching the monitor. He’s been staring around his room for a good 20 minutes since I put him down and now he’s starting to cry. I go in to rub his chest and let him know I’m here. His eyes start to close again so I leave the room and he finally falls asleep. Hallelujah. While he’s napping I grab an apple and peanut butter as a snack and simultaneously get harassed by Lucy and Charlie. 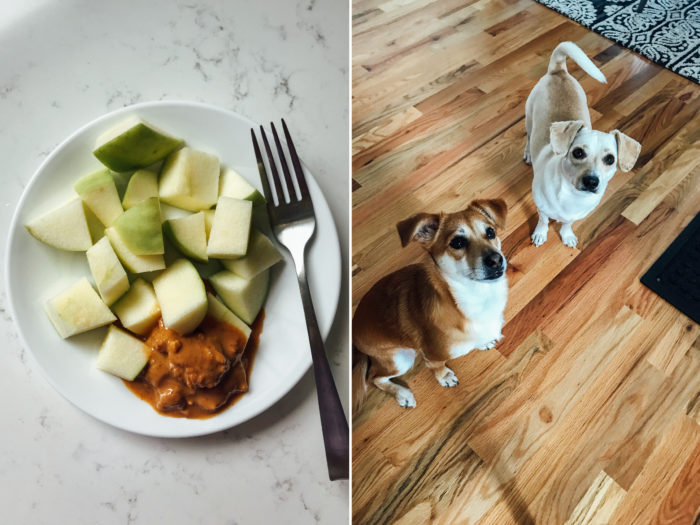 1230pm It’s time to pump again. Fun! I attempt to write but Brandon comes home for lunch and we end up talking. He helps prep lunch for us while I finish pumping.

100pm I eat a quick lunch of a frozen burrito with avocado and sauerkraut, paired with sparkling water and magnesium. I take magnesium to help with digestion and sleep but I also like the way it tastes with flavored sparkling water. Yum. 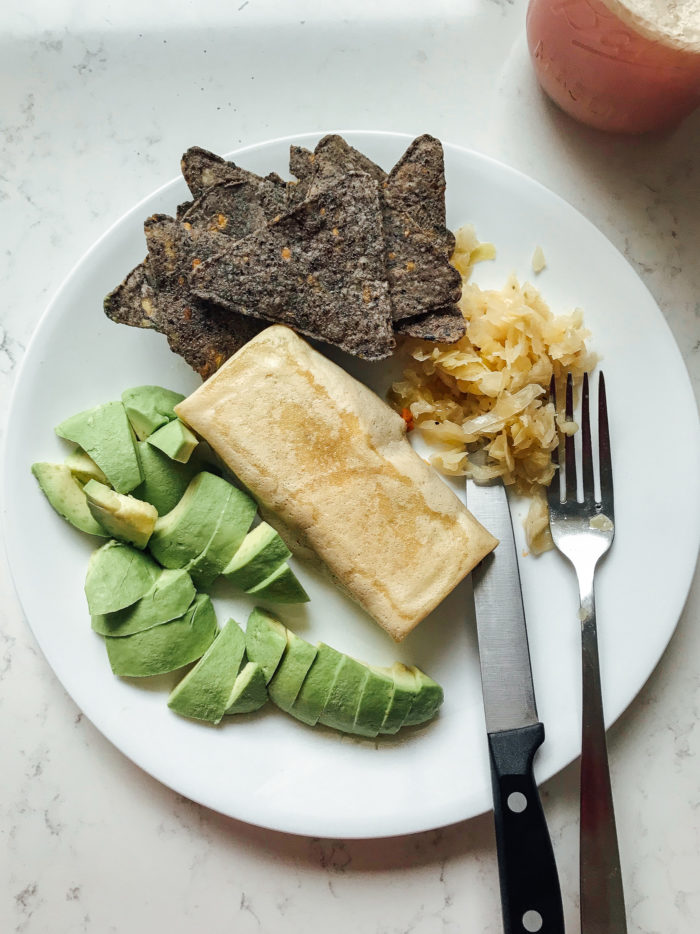 110pm Grant is officially awake so I shove the rest of my food in my face then go in to get him. I feed him again, burp him and put him in the bouncer seat while he digests. I don’t actually bounce him during this time, it’s just a spot for him to sit since most of the time he’s not a fan of being held unless you’re up and moving around. True story.

230pm We do a little more cranky tummy time then head out for a walk. It’s been raining nonstop in Georgia this winter so we have to take advantage to get outside whenever we can. I try to time it so that he’ll nap during this time and it doesn’t always work but today it did. Score! 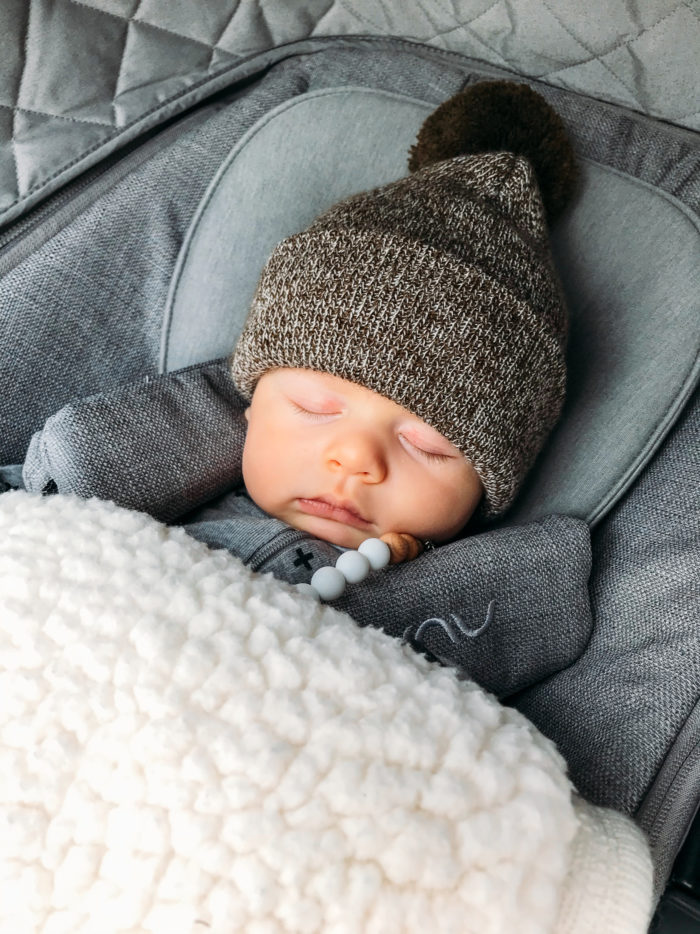 415pm I grab a quick snack of whole grain graham crackers with a few squares of dark chocolate then sit down to feed him again. 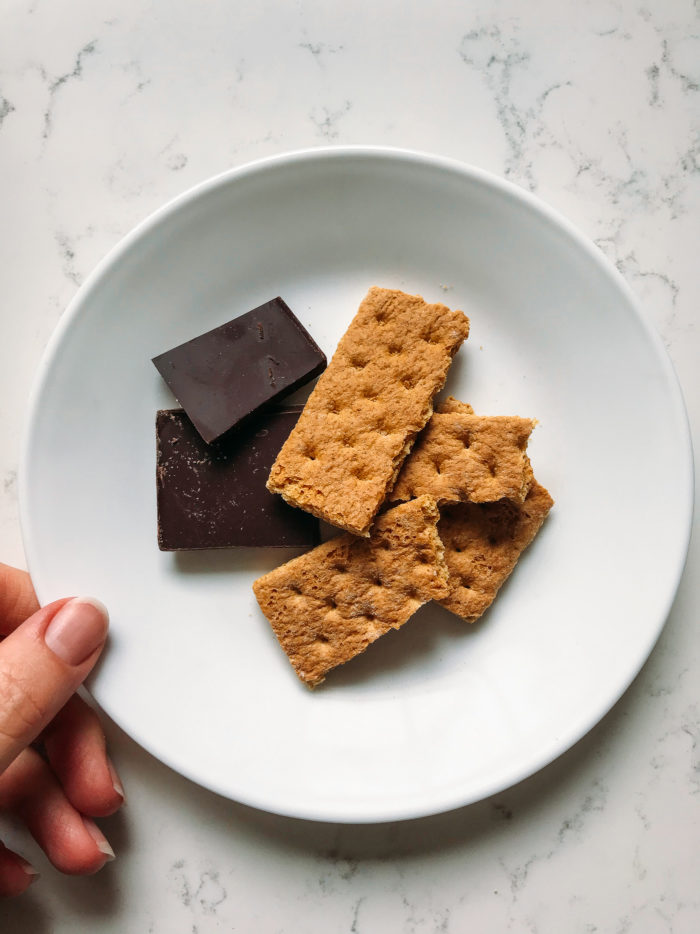 445pm After he’s done eating I put him in his chair again while I start to prep the greens we got from our local CSA. I’m making my One-Pot Golden Lentil Curry with swiss chard for dinner. So good! 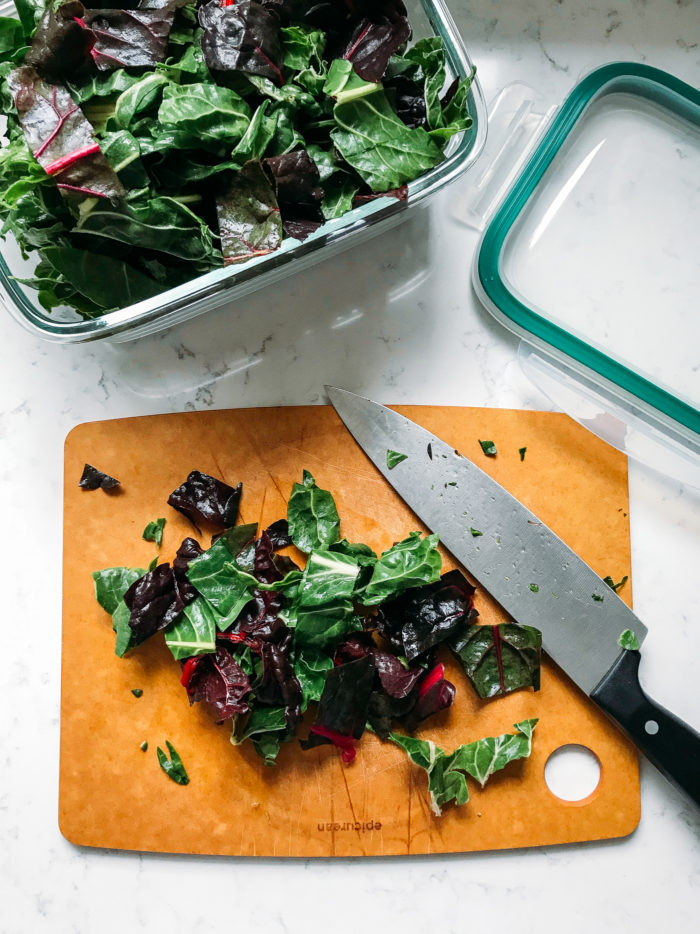 515pm Brandon is home so I have him take over and entertain Grant while I finish making dinner and pump for the fourth time today. I take the time to catch up on email while I pump.

545pm We try to put him down for a catnap before we eat dinner but he isn’t having it. I put him back in the baby carrier and pick up the house a bit before washing more bottles and pump parts then I grab a handful of trail mix for a snack. He eventually falls asleep in the carrier. 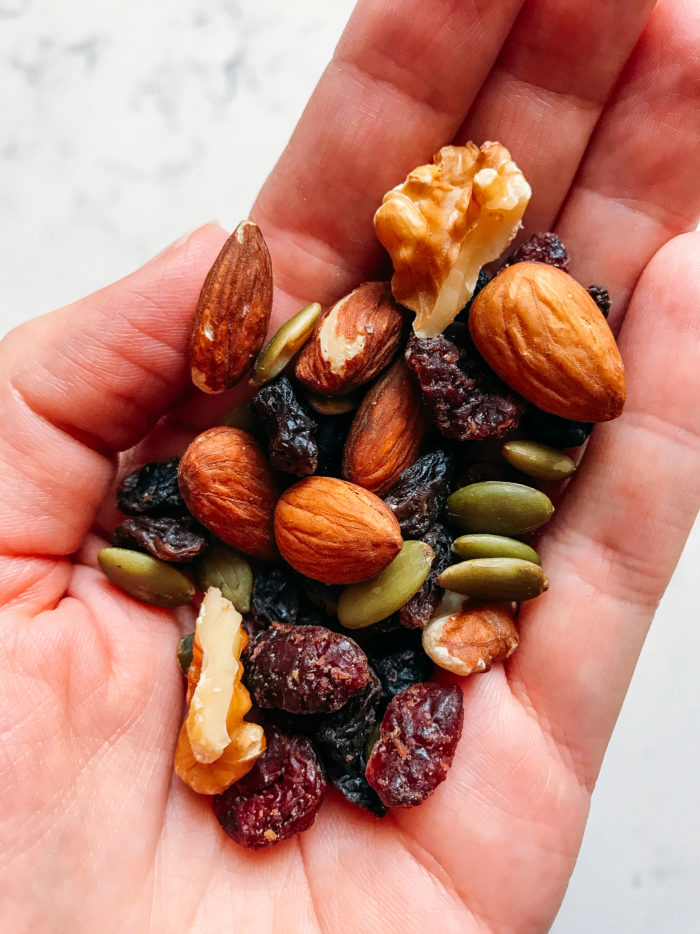 630pm I take him out of the carrier and he hangs out in his bouncer seat while we eat. In between bites, Brandon talks and sings to him in order to keep him calm. It’s so cute to see him smile at his daddy while he sings to him! 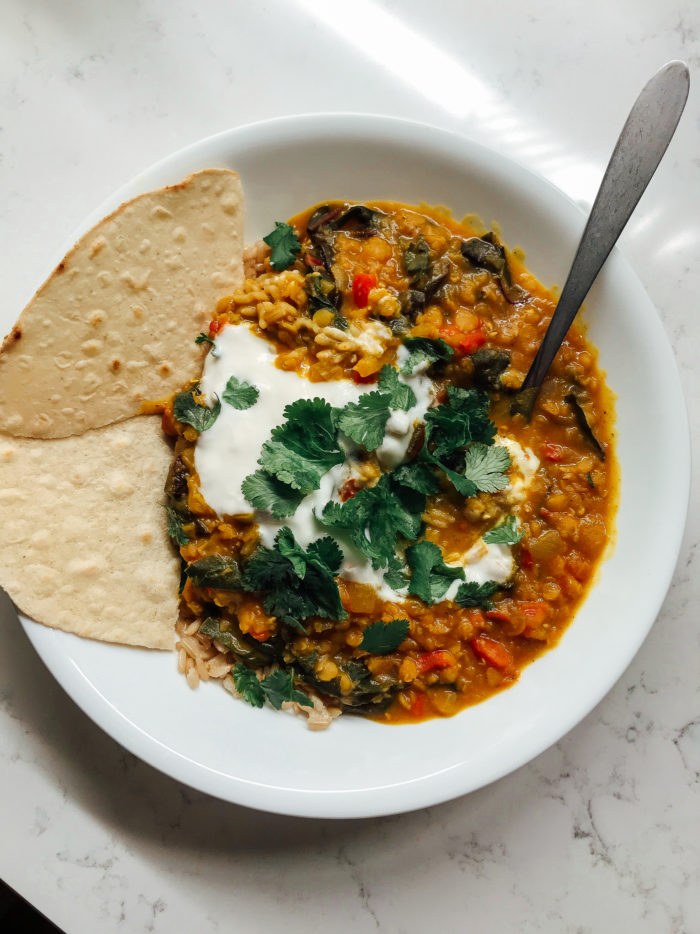 715pm I put on our bath time playlist and dance with Grant in the kitchen while Brandon cleans up and prepares his bath. We have bath time every night but only use soap about twice a week so that we don’t dry out his skin. He loves it. Probably because he knows milk is coming. ;) 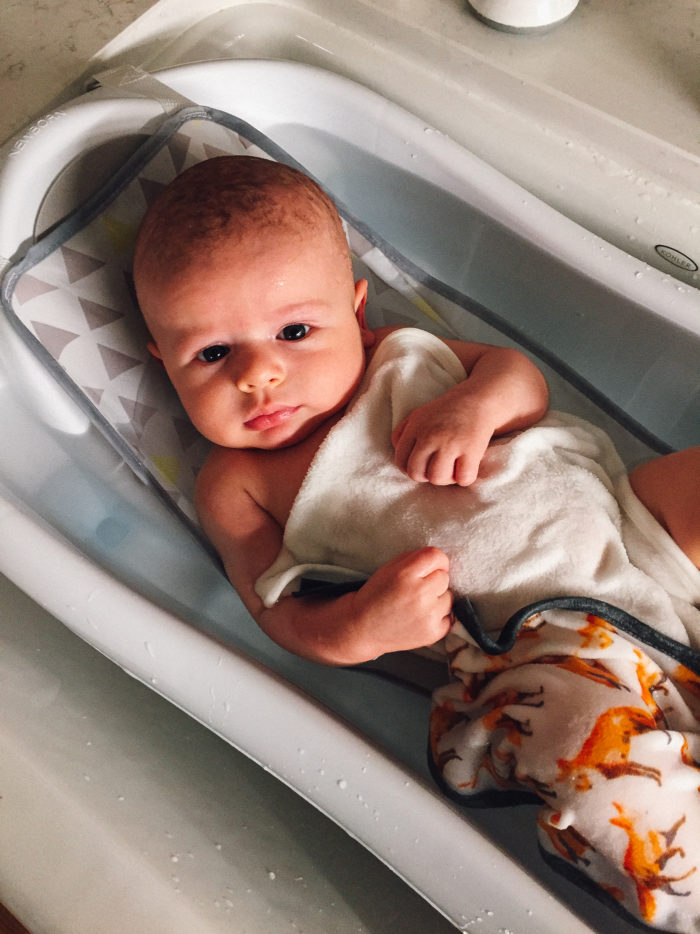 730pm Once he’s nice and dry I put on a fresh diaper and give him a quick little massage with lotion that smells like an orange creamsicle before handing him over to daddy for his nighttime feeding. When he’s done feeding, Brandon reads him Goodnight Moon then puts him to bed.

Meanwhile I put away the clean dishes and make myself a bowl of almond milk yogurt with granola and more dark chocolate. Are we sensing a theme with chocolate yet? 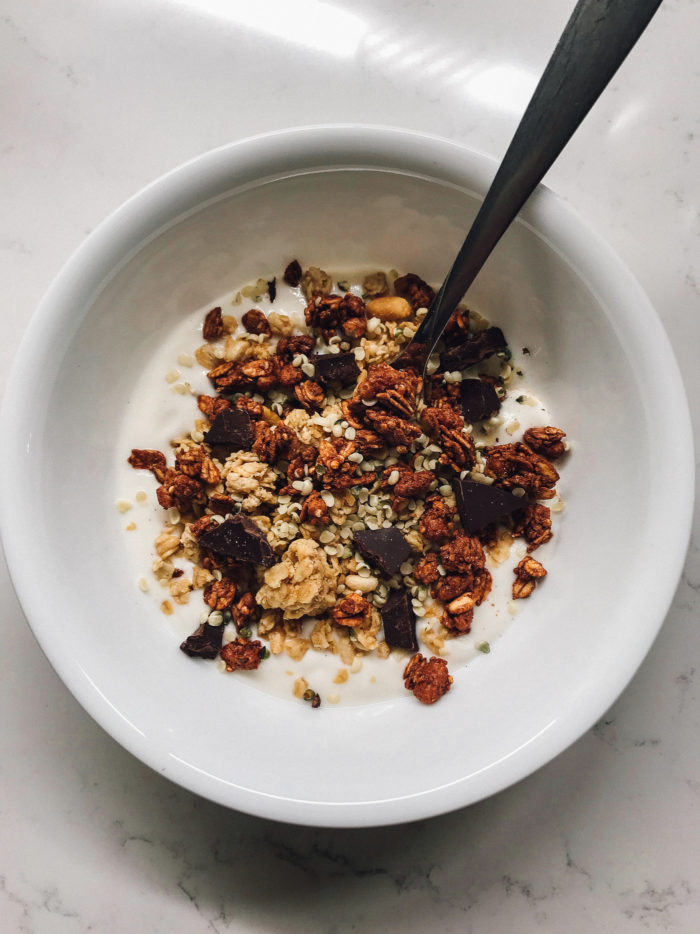 800pm I take some time to answer comments and work on a blog post before brushing my teeth and getting in the shower.

900pm After I’m in my PJs, I pump one last time before going to bed around 9:30pm. Brandon stays up and does a “dream feed” at 1030pm so I can get between 6-7 hours of sleep, depending on when the little man decides to wake up.

We’ve had a few days where he doesn’t wake up until 6:00 or even 7:00am but as you saw today, it’s not super reliable yet. Either way I’m so proud of how well he’s doing. We love our baby so much!

This post was created in partnership with a brand that I have loved for years, Bob’s Red Mill. As always, all opinions and text are entirely my own. Thank you for supporting the brands that help make it possible for me to bring you quality content. For more delicious recipes and a coupon for $1.00 off any product, please visit Bob’sRedMill.com. 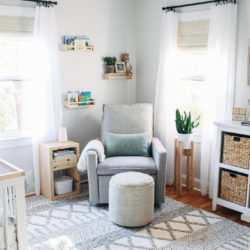 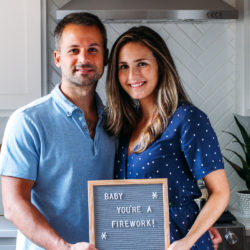 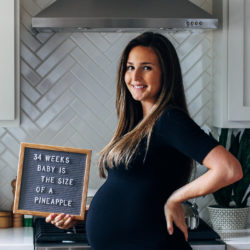